The COVID-19 pandemic made it difficult at times for insurers to work through natural catastrophes, said a Wawanesa executive during a recent web conference. But they’ve learned a few lessons because of it.

As Cats stormed through Alberta to the tune of about $2 billion in insured damages, with the June hailstorm in Calgary leading the way at $1.3 billion, insurers had a number of key questions to answer.

“How closely could we interact with them? Who could come into their homes? What was going to be the risk of the pandemic spread as they’re in the middle of the catastrophe?” listed Carol Jardine, president of Canadian P&C Operations at Wawanesa.

While net promoter scores show they responded well, clients were anxious. “They were nervous about all of this activity around them from the pandemic at the same time that they’re trying to get themselves back on track again after some significant Cats,” Jardine said during the CatIQ Connect web conference session State of the Industry. 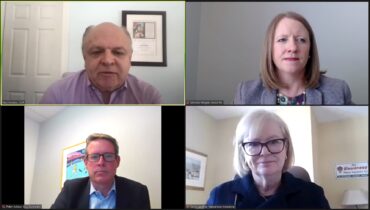 Clockwise from top left, moderator Paul Kovacs of ICLR, Monica Ningen from Swiss Re, Carol Jardine, of Wawanesa and Peter Askew from Guy Carpenter, speak at the February 2021 CatIQ Connect session, “State of the Industry.”

Among the lessons learned was the importance of digital tools. She highlighted photo estimating and entrusting clients to take photos and submit them, then using artificial intelligence to provide an estimate.

“So from a pandemic perspective, we had to respect the public health, work at that distance that people wanted, but at the same time provide that exceptional claim service that people want,” Jardine said. “So I think this is probably the toughest Cat season for claims adjusters and vendors and policyholders who were involved in it.”

Fellow panellist Peter Askew, president and CEO at Guy Carpenter, agreed that the industry responded well despite the challenges.

“We have Cat playbooks that existed to actually achieve those things but you can throw those out the window when we can’t get people on the ground,” he assessed. “But I think, overall, it was a very good response.”

The session also included Monica Ningen, president and CEO of Canada and English Caribbean at Swiss Re, on the panel, which was moderated by Paul Kovacs, executive director at the Institute for Catastrophic Loss Reduction (ICLR).

Askew spoke to tail risks facing the industry. He believes that insurers, reinsurers and brokers have generally done a good job of evaluating tail risks for most perils. “We can be somewhat surprised when massive or unique events occur, but we can certainly learn from them,” he said. “Earthquake events have informed our models rather well. Wind is a peril which we tend to understand, although changing frequency and severity is a concern.”

But the view of risk is changing, Askew observed. And it’s providing new challenges.

“Climate change is a massive factor in all of this and it’s influencing a number of parallels like wind, hail, wildfire and drought, amongst others,” he said.

Take wildfires, for example. Canada has had its share, but Australia and California have seen come that have been “quite devastating” in recent years, Askew said.

“That’s driven a need for a better understanding of that peril. And it’s driven a need for better models — in many cases, they did not exist,” he said. “So now we have you know different vendor models and other models that are being developed within the firm so we can get a better grasp on those sorts of perils.”