London insurance market “well-positioned” to respond to Brexit, but decision could be “moderately credit negative”

The London insurance market is resilient and well-positioned to respond to the United Kingdom’s decision to leave the European Union (EU), the International Underwriting Association of London (IUA) said on Friday. 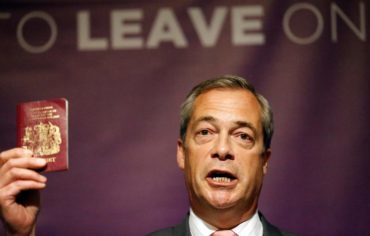 UK Independence Party (UKIP) party leader Nigel Farage holds his passport as he addresses media and party members during a speech focusing on the upcoming EU referendum in London, Friday, June 3, 2016. Farage is a leading campaigner advocating Britain to cut its ties with the rest of Europe, known by the nom de guerre ‘Brexit’. (AP Photo/Frank Augstein)

In a referendum held on Thursday, about 52% voted to relinquish EU membership.

The IUA, which represents international and wholesale insurance and reinsurance companies operating in or through London, said in a media release that insurers have been preparing for the possibility of a vote to leave and considering how to adapt their business plans in response to new trading conditions.

“There will now be an extended period of negotiation to determine the exact terms upon which the U.K. exits the EU,” the release said. “The role of financial services must form a key part of any discussions about a new trading relationship between the U.K. and the remaining EU member states.”

Dave Matcham, chief executive of the IUA, said that “clearly the U.K.’s decision to exit the EU presents challenges for London market companies and uncertainty surrounding the potentially prolonged nature of this process will be problematic for future planning. Our industry is, however, experienced in responding to change. The free trade benefits of EU membership have been vital in maintaining London’s position as a global insurance hub and are highly valued by IUA members. This is true both for insurers headquartered in the U.K. and those international firms that use London as their centre for European business.”

Matcham also noted that many companies “will now be considering their own individual responses. Continued access to European markets is essential and will, I expect, be at the forefront of the process to respond to the referendum decision. The IUA will be working with the London Market Group to ensure our industry’s views are fully represented as developments continue.”

Regulations governing the conduct of insurance business in the U.K. have been established in the context of EU membership. The release noted that the U.K. was instrumental in developing Solvency II and for London Market companies conducting European business, the maintenance of regulatory equivalence will be important.

Lloyd’s of London chairman John Nelson said in a statement that he was “confident that Lloyd’s will stay at the centre of the global specialist insurance and reinsurance sector, and I look forward to continuing our valuable relationship with our European partners. For the next two years, our business is unchanged. Lloyd’s has a well-prepared contingency plan in place and Lloyd’s will be fully equipped to operate in the new environment.”

Fitch Ratings noted that the “Leave” result in the referendum is credit negative for most sectors in the U.K., “due to weaker medium-term growth and investment prospects and uncertainty about future trade arrangements.”

“Brexit will be moderately credit negative for the U.K. sovereign,” the ratings firm said, adding that it will review the sovereign rating “shortly.”

In the medium- to long-term, Fitch said in a press release on Friday, any broader rating actions are likely to depend on factors such as the size and duration of the impact on GDP, the extent of sterling depreciation and their subsequent effect on inflation, asset prices, unemployment and interest rates.

“The UK’s status as a major international banking hub could be damaged as some business lines shift to the EU,” Fitch concluded.

But A.M. Best Company said that it “does not expect to take rating actions in the near term as a direct consequence” of the decision by U.K. voters to leave the EU. “The implications for the financial strength of insurers with regard to subsequent investment market volatility, currency fluctuations and increased economic uncertainty will be closely monitored,” A.M. Best said in a release. “Also, as the terms of the exit are negotiated, A.M. Best will discuss with rated companies what prospective changes will mean for their competitive positions and ability to continue to access business in the U.K. and the EU.”

The decision has led to a sharp drop in sterling and global equity markets. A.M. Best notes that the financial market volatility could have a material impact on insurers’ half-year results and balance sheets, with most companies reporting their positions as at June 30. Solvency II’s market-consistent approach to valuing the economic balance sheet means that financial market volatility will be closely reflected in European insurers’ reported solvency capital ratios, A.M. Best added.

“We are deeply saddened to hear that the people of the United Kingdom have voted to leave the European Union,” Insurance Europe president Sergio Balbinot said. “We now hope that policymakers can work quickly to limit the impact that this time of uncertainty will have on both consumers and businesses.”

1 Comment » for London insurance market “well-positioned” to respond to Brexit, but decision could be “moderately credit negative”