Look back, but not too far: Why some perils need a new approach

The insurance industry needs to look at the “more recent past” and take a shorter-term view of catastrophic perils to see their effects going forward, Swiss Re told Canadian Underwriter recently.

“When we’re looking at recent events, including the 2020 hail event in Calgary, does that change our view at all on the frequency and the severity of the peril of hail?” asked Dipika Deol, head of P&C treaty underwriting at Swiss Re Canada & English Caribbean. “If we go back to 1950, would I as an underwriter feel comfort that’s going to inform my view of what losses could happen this year and next year? Not so much.

Deol spoke with Canadian Underwriter Friday in advance of the one-year anniversary of the Calgary hailstorm on June 13, 2020. That event, the largest hail loss in Canadian history, cost the industry about $1.3 billion. The storm largely impacted northeastern Calgary, but also Rocky View County and Airdrie.

“The reason the hail loss was so large is due to the fact that it hit a densely populated area,” Deol said. Eighty-eight per cent of the insured loss was personal property and auto, mostly damage to house roofs and siding, and vehicles.

“Northeast Calgary was hit with the biggest hailstorm in Canada’s history right around this time last year, and there are still people struggling to repair properties there,” reported Sheila Murray, co-founder of CREW (Community Resilience to Extreme Weather), during the CatIQ Connect conference Thursday. 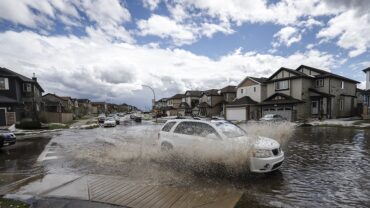 A vehicle passes through a flooded intersection as residents begin cleaning up in Calgary, Alta., Sunday, June 14, 2020, after a major hail storm damaged homes and flooded streets on Saturday.THE CANADIAN PRESS/Jeff McIntosh

Canada’s second-largest hail event occurred in August 2014. The event hit central Alberta, which is not as densely populated as the Calgary area, and cost $524 million in 2014 dollars.

Deol said an “open question” for the industry is, “What is our comfort level with poorly-modelled perils like hail?”

Secondary perils like hail, “are increasingly becoming primary loss drivers in Canada, and as an industry we must look at the more recent past for the impact they can have going forward,” she said. Deol added that the timeframe or “observation window” could look very different between perils such as hail, tornado, hurricane, or earthquake.

Hail and tornado observational technology has improved a lot over the years, she said. But risk assessments based solely on historical data sometimes have to undergo significant statistical clean-up.

“The fact that we have good observational technology is great,” she said.  “But we still have to make sure we are comfortable in terms of how we use that data to inform our view of the risk…[and] of the hazard itself.”

Another issue with hail — and more so, with tornado — events is that they are “notoriously localized,” Deol said. In hailstorms, for example, hail stone sizes can vary half a kilometre apart (or even from one side of the street to the other), and the reason why is not understood in detail.

“We have to continue to improve our modelling efforts so that we can better understand the risk,” Deol said. “We have to understand meteorologically what are the factors that precipitate the formation of these severe convective storms.”

Looking forward, the industry can do a better job of risk accumulation management, Deol said. “Between an insurer and a reinsurer, you obviously have to figure out what is this accumulation of exposure sitting on either side’s balance sheet and how would you share that risk,” she said. “That kind of accumulation management and risk-sharing concept becomes quite crucial when you’re looking to share those risks between insurers and reinsurers.”

For perils like earthquake, hazard data can be overlapped with an exposure map to show accumulation risk. But hail is not as well-understood as earthquake. “We can see a pattern emerging within ‘Hail Valley,’” she said. “In the prairie regions, definitely, quite a lot of hail events have taken place in the past. We can only assume that’s going to continue.”

Deol said the industry needs to make sure that insurers and reinsurers are working together to price for the risk adequately. “And we then decide between us how the risks get shared on who’s balance sheet. The better a view you have between that exposure map and the hazard, and an understanding of the modelling aspect, the tighter and more robustly and the more confidence you’re going to have about the risk-sharing that is going to take place as well.”

Feature image: Meynard Daavid, right, looks on as volunteers help board up his house as residents begin cleaning up in Calgary, Alta., Sunday, June 14, 2020, after a major hail storm damaged homes and flooded streets on Saturday.THE CANADIAN PRESS/Jeff McIntosh