The August downpours that dumped more than 30 inches of rain in two days on parts on Louisiana have left as many as 100,000 insured cars and trucks damaged, the National Insurance Crime Bureau (NICB) in the United States said on Thursday. 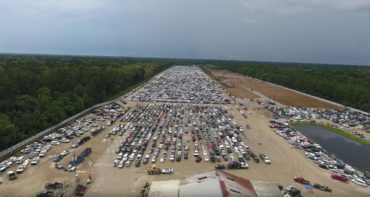 According to the Louisiana Office of Motor Vehicles, “the numbers are much higher than originally expected,” NICB said in a press release. While claims reporting and vehicle recovery efforts were initially slowed by the large scale flooding, they are now in full swing, the bureau added.

Based on the extensive vehicle losses following Hurricane Katrina in 2005, Louisiana enacted strong measures to help protect unsuspecting consumers from buying a flood-damaged vehicle, NICB reported. Once an insured vehicle has been determined by the insurer to have been flood-damaged, it is towed to an auction facility and processed with a new title that indicates it has been water-damaged.

In Louisiana, during an emergency like the recent flooding, the severity of flood water damage may require a Certificate of Destruction. In that case, the vehicle has to be crushed, or sold to a company that will dismantle it for parts and destroy what remains. The vehicle identification number (VIN) is entered into the state’s records, NICB’s VINCheckSM, and the National Motor Vehicle Title Information System (NMVTIS) so that consumers can check a vehicle history before purchasing a used car or truck.

“It’s buyer beware,” said the state’s Commissioner of Motor Vehicles, Karen St. Germaine, who warned those in the market for a used car both in state and across the country to do their homework before putting any money on the line. For example, buyers should:

The flooding in Louisiana that began on Aug. 12 has been called “one of the most significant U.S. natural disasters, let alone flood events, since Superstorm Sandy” in 2012 by Risk Management Solutions, Inc. (RMS). According to RMS, heavy rainfall caused riverine flooding across Louisiana, with large parts of southeastern Louisiana receiving more than 10 inches of rain over a 48-hour period and some areas receiving as much as 31 inches. RMS has estimated that the number of properties affected by the flooding ranges from 40,000 to 60,000. Flooding has been particularly severe in the parishes of Livingston (~39,000 homes flooded), Ascension (~15,000 homes flooded), East Baton Rouge and Tangipahoa.

On Aug. 14, Aon Benfield’s Impacting Forecasting estimated that the recent flooding across parts of Louisiana and southern Mississippi could approach or possibly exceed US$1.5 billion in economic damage.

Headquartered in Des Plaines, Ill., the NICB is a not-for-profit organization exclusively dedicated to preventing, detecting and defeating insurance fraud and vehicle theft through data analytics, investigations, training, legislative advocacy and public awareness, the release said. The NICB is supported by more than 1,100 property and casualty insurance companies and self-insured organizations. NICB member companies wrote over US$413 billion in insurance premiums in 2015, or more than 79% of the nation’s P&C insurance (including more than 94 percent (US$187 billion) of the nation’s personal auto insurance.