Louisiana flooding “one of the most significant” natural disasters since Superstorm Sandy, 40,000-60,000 properties affected: RMS

Flooding in Louisiana is “one of the most significant U.S. natural disasters, let alone flood events, since Superstorm Sandy” in 2012, Risk Management Solutions, Inc. (RMS) said on Friday. 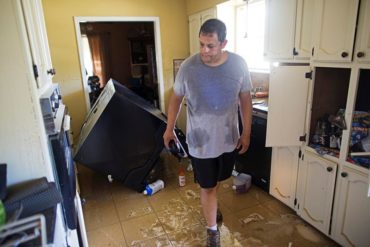 Raymond Lieteau takes photos of his flood damaged kitchen for his insurance claim in Baton Rouge, La., Tuesday, Aug. 16, 2016. Lieteau had more than five feet of water in his home. At least 40,000 homes were damaged and eight people killed in the historic Louisiana floods, the governor said Tuesday, giving a stark assessment of the widespread disaster. (AP Photo/Max Becherer)

Heavy rainfall since Friday, Aug. 12 has caused widespread riverine flooding across Louisiana, with large parts of southeastern Louisiana receiving more than 10 inches of rain over a 48-hour period to Aug. 13, RMS said in an update. Some areas received as much as 31 inches, RMS added.

While RMS said that it does not plan on issuing a loss estimate, it continues to monitor the event as it unfolds. According to the statement, the number of properties affected by the flooding ranges from 40,000 to 60,000. Flooding has been particularly severe in the parishes of Livingston (~39,000 homes flooded), Ascension (~15,000 homes flooded), East Baton Rouge and Tangipahoa.

Although Louisiana has the third highest number of National Flood Insurance Program policies in force in the United States (452,000 as of June 2016), flood insurance penetration is low, especially in affected parishes. “Thus, it’s expected that many properties sustaining damage from these floods are either uninsured or underinsured for flood, resulting in reliance on federal disaster grants in parishes declared as major disaster areas,” the statement said. “The event stresses the importance of understanding what, if any, flood coverage is included in a standard homeowner policy, and serves as yet another warning to those considering dropping or forgoing flood insurance. Relying on historical record or experience alone can create a false sense of security for anyone trying to understand their flood risk.” 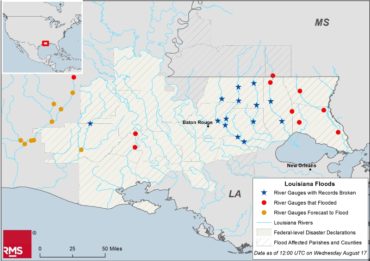 In describing the flooding, RMS explained that a slow-moving, near stationary tropical disturbance combined with high humidity levels and warm sea surface temperatures to bring torrential rainfall to much of Louisiana and parts of Mississippi over the course of three days.

The system pulled record amounts of moisture from the Gulf into the atmosphere, creating a continuous cycle of heavy rain and subsequent flooding throughout the region.

“The flooding has impacted both major and minor river networks,” Jeff Waters, a meteorologist and flood risk expert at RMS, said in the statement, adding that Louisiana was already experiencing one of the ‘top 20’ wettest years on average leading up to the event. “The already heavily saturated soil conditions have only helped to exacerbate the flooding, signifying the importance of having a view of flood risk that inherently reflects antecedent conditions pre-event. Doing so ensures that rainfall discharge, runoff, and inundation are captured as accurately as possible.”

Also, the fact that floodwaters overtopped a levee at Laurel Ridge stresses the importance of understanding the sensitivities of flood risk mitigation strategies, including defence and levee failures, Waters said.

“It’s difficult to tie any single event to climate change,” he noted. “However, this flooding is an example of what could happen as a result of climate change and increased greenhouse gases: an increase in frequency and intensity of extreme precipitation events.”

More than 1,000 members of @LANationalGuard are hard at work during #LouisianaFlood. Keep up the good work soldiers pic.twitter.com/mShepyIoUJ

On Sunday, Aon Benfield’s catastrophe model development team estimated that the flooding across Louisiana and southern Mississippi “could approach or possibly exceed US$1.5 billion in economic damage.” Impact Forecasting further said that based on the volume of river crest records that have been set during the event, “this is one of the most catastrophic non-tropical cyclone triggered flood events in the state of Louisiana since 1983.”

RMS concluded that additional rainfall forecast will exacerbate current ground water conditions and river levels, increasing the risk of flooding, though accumulations are not expected to be nearly as heavy as experienced over the previous weekend.