CALGARY – Measures to control the COVID-19 pandemic made for a bumpy ride for most of the ski and snowboard industry in Canada, as revenues slumped even at resorts that were able to maintain near-normal lift ticket sales in a season that’s coming to a close.

While some resorts are reporting increases in visits thanks to local support, most were hurt by the loss of well-heeled international guests as well as COVID-19 related disruptions to food and guest services, said Paul Pinchbeck, CEO of the Canadian Ski Council.

“Across Canada, we’re probably looking at a 35 to 40 per cent decline in our total revenues,” he said in an interview, though he noted the impact varies widely from region to region.

Western resorts cater to a destination traveller who spends more money, “whereas the eastern resorts and the small resorts tend to have a local who comes all the time, but doesn’t have quite as high a spend.”

He said by far the worst-hit resorts were in Ontario, which operated for an average of only 47 days out of what’s typically a 100-day season thanks to a provincial lockdown that ran from late December until mid-February and another that began just before the Easter weekend.

“It was devastating for us. We always felt that skiing, we were part of the solution, not part of the problem,” said Kevin Nichol, president of the Ontario Snow Resorts Association. 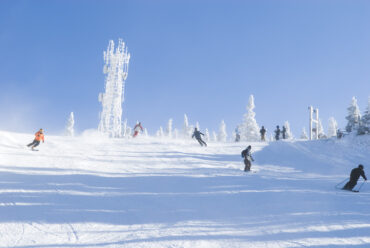 The industry adopted new safety protocols, reduced food operations, limited daily ticket sales and invested in new technology such as online ticketing and contactless transactions but still was shut down twice without warning, resulting in thousands of layoffs and thousands of wasted dollars, he said.

The lockdowns at Ontario’s 50 resorts likely erased more than $160 million from the $420 million the industry generates in winter and summer activities in a typical year, he estimated. He added it could take five years for the resorts to recover financially.

“Provincial updates were often short notice with a lot of uncertainty about when or if the season could continue,” said Tara Lovell, spokeswoman for Blue Mountain Resorts about 150 kilometres north of Toronto.

She said the resort had only 53 days on snow, the shortest recorded ski season ever for the hill.

She said ski and snowboard lessons, however, were down by about 40 per cent and daily lift ticket sales fell as resorts restricted numbers, leading many to rely on federal wage subsidy programs.

Meanwhile, on the West Coast, Whistler Blackcomb ski resort was forced to close earlier than usual in late March when British Columbia enacted a new lockdown because of a surge in pandemic cases.

But Colorado-based owner Vail Resorts, Inc., said its performance had already been negatively affected by the closing of the Canadian border. It estimated the proportion of international guests in the quarter ended Jan. 31 fell to about 15 per cent of visitors from 48 per cent in the year-earlier period.

All six ski areas owned by the Resorts of the Canadian Rockies – one in Alberta, three in B.C. and two in Quebec – have closed for the season, said spokesman Matt Mosteller.

He said the number of visitors to the hills was up this year thanks to local skiers, but revenue was down because of fewer international and long-haul skiers who tend to spend more on accommodations and other services.

The company plans to operate its chairlifts for mountain biking, hiking and sightseeing at its Mont Sainte Anne resort in Quebec and Fernie and Kicking Horse resorts in B.C. this summer, he added.

Sunshine Village Ski Resort in Banff National Park is still expecting a few weeks of spring skiing and snowboarding but has decided not to operate its gondola lift and hotel this summer because of the lack of international visitors, said spokeswoman Kendra Scurfield.

“Our numbers are down but we can’t complain when so many other businesses had it so much worse than we did,” she said.

Nearby Banff Norquay says it had more visits this season than last, while Lake Louise Ski Resort, about 60 kilometres to the north, says its numbers were the same. Both say they will operate their sightseeing chairlifts and other services this summer.

Pinchbeck said the silver lining of the pandemic ski season is that it forced ski resorts to adopt new practices that could enhance visitor experiences in the future.

Online pre-booking of lift tickets, lessons and other services, for example, give guests certainty that there will be room in the parking lot and on the hill for them, and will likely carry on after COVID-19 is no longer a concern.

Resorts have also learned a lot about how to better manage indoor food and beverage spaces and will likely continue to offer more outdoor spaces as an alternative. And there are already signs that season pass sales pushes will be more aggressive and innovative, he said.