The industry-wide combined ratio of the United States property & casualty insurance industry is estimated to have deteriorated by 2.4 points to 100.7% in 2016, A.M. Best Company Inc. said in a recent report.

The decline in underwriting performance “was driven” by “a return of catastrophe losses to a more historically average level and a reduced benefit of favorable development of loss reserves,” stated Oldwick, N.J.-based A.M. Best in the report, titled Profitability Slides, Surplus Growth Slows and Competition Intensifies for U.S. Property/Casualty Insurers. 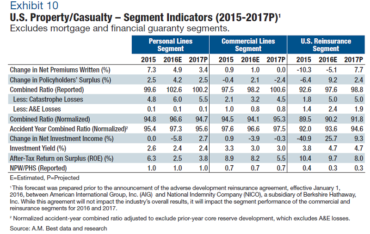 A.M. Best estimates industry-wide net premiums written were $533.5 billion in 2016 and is projecting that figure to rise to $546.7 billion in 2017. All figures are in United States dollars.

The ratings firm suggested that U.S. auto insurers “have continued their investments to develop and improve tools used in data analytics and usage-based insurance.”

“The further penetration of usage-based insurance has increased in recent years, and more advanced pricing segmentation has been achieved as insurers can now better understand the unique driving characteristics of each insured.”

A.M. Best estimates the combined ratio in home insurance deteriorated by 5 points to 97% in 2016, “reflecting some accumulating losses from weather activity that is less than catastrophic, and indicative that rates may not be quite adequate yet.”

The report noted that in 2016, Hurricane Matthew made landfall in the Florida panhandle.

“While actual losses from Matthew were well under initial estimates, they were nonetheless considerable,” A.M. Best added. “In addition, the homeowners line also faced a similarly volatile tornado, hail, and thunderstorm season as has become customary in recent years.”

There were also numerous wildfires in the U.S. southeast, “including the fire that caused significant damage in Gaitlinburg, Tennessee.”

“In 2016, commercial lines writers recorded favorable core reserve development equating to 1.6 points on the segment’s combined ratio, compared with 3.1 points in 2015,” A.M. Best reported. The favorable development in 2015 was “net of an unusual level of reserve actions taken” by American International Group Inc. during the fourth quarter of that year, A.M. Best added.

In its annual report released in early 2016, for calendar year 2015, AIG reported $3.386 billion in prior year development in commercial P&C in the United States and Canada. Of that, $1.529 billion was in excess casualty.

On Jan. 20, 2017, AIG said in a release it “expects a material prior year adverse development charge” during the fourth quarter of 2016. AIG is scheduled to release its 2016 financials Feb. 14.

That announcement “highlights the challenges that AIG management continues to face in reserving, pricing, and handling this longer tail commercial lines business, and the effectiveness of the group’s enterprise risk management function,” A.M. Best said in a separate release Jan. 26.