M&A insurance claims rising, 23% of deals over US$1 billion end in a claim: AIG study

The frequency of insurance claims related to mergers and acquisitions (M&A) is rising as large deals prove risky and the average payout on the most severe category of claims tops US$20 million, according to a new global study from American International Group, Inc. (AIG). 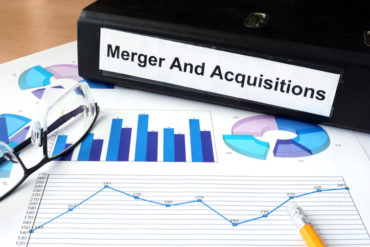 The AIG study of its representation and warranty (R&W) claims, now in its second year, examined policy years 2011 to 2015 and look at policies covering approximately 1,600 worth more than US$400 billion. AIG is one of the largest writers of R&W insurance globally.

This year, the study looked into claims severity for the first time, revealing that more than half of all material claims (those incurring more than US$100,000) during the period were US$1 million or more, AIG said in a press release.

The main driver of the increase was a seven-point jump in the claims count from policies written in the 2011 to 2014 period (to 21%) compared to the prior-year study. R&W policies have potential claims tails as long as seven years, which means policies written in the 2011 to 2014 period are still subject to claims, and this explains the higher claims percentage in this year’s study versus the 14% reported for the same policy period in last year’s Global M&A Insurance Claims study, the release said.

“A maturing market mixed with pressure to execute transactions quickly could be a leading factor behind the increase in frequency,” said Michael Turnbull, M&A manager for AIG Americas. “At the same time, we’re seeing claims across the board in terms of severity, which means that the product is responding to a host of different situations.” 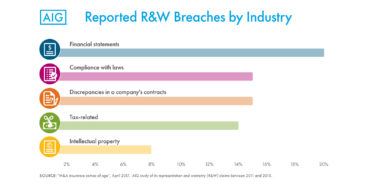 “The bigger and more complicated a deal is, the more likely there is an unknown liability lingering,” said Mary Duffy, global head of M&A insurance with AIG, in the release. “We are paying sizeable claims, sometimes writing eight-figure checks in different geographies.”

Claim triggers were mostly steady year-over-year with one standout exception: “compliance with laws” jumped to 15% of alleged deal breaches, compared to just five per cent last year, making it the second leading claims trigger. The top five common breaches claimed, according to the study include: financial statements (20%), compliance with laws (15%), discrepancies in a company’s contracts (14%), tax-related (14%) and intellectual property (8%).