What made the Dunrobin tornado so unique

One tornado that struck the Dunrobin, Ont. area Friday was only the second EF3 twister to touch down in the province in September or later – and the first during this time period in 120 years, said Glenn McGillivray, managing director of the Institute for Catastrophic Loss Reduction (ICLR).

The last F3 tornado to touch down in Ontario in September was in 1898 in Merritton, Ont. (now known as St. Catharines). 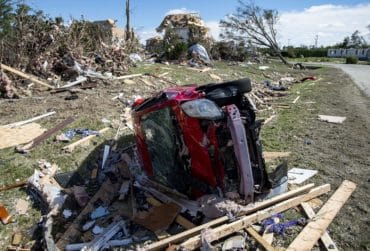 A car destroyed by a tornado is seen in Dunrobin, Ont., west of Ottawa, on Saturday, Sept. 22, 2018. The storm tore roofs off of homes, overturned cars and felled power lines in the Ottawa community of Dunrobin and in Gatineau, Que. THE CANADIAN PRESS/Justin Tang

Under the Enhanced Fujita Scale, in use in Canada since April 2013, EF3 tornadoes can see wind speeds reach between 225-265 km/h. The two tornadoes that struck the Ottawa/Gatineau, Que. area on Friday were rated as high EF3 (Dunrobin/Gatineau) and EF2 (west and south Ottawa, with wind speeds of between 180-220 km/h).

“So, the Dunrobin tornado can be considered quite rare from a strength versus time of the year perspective,” McGillivray told Canadian Underwriter Monday. “Also, not many tornadoes occur in this part of the province.”

One of the last memorable tornadoes to hit the area was an F3 tornado in August 1994 (wind speeds between 250-320 km/h, according to the Fujita Scale that Environment Canada used until the 2012 tornado season). The event in the Gatineau suburb of Aylmer, Que. damaged about 385 homes and resulted in several injuries.

The most recent tornadoes will be heavily insured because wind – unlike overland flood – is commonly included in virtually all property policies, McGillivray said. However, coverage for things like outbuildings and fences can depend on policy specifics. Damage to vehicles is covered, provided comprehensive coverage is in place.

Business interruption may be triggered if a building holding the coverage experiences damage and is offline for a period outlined in the policy wording, McGillivray added. “Generally speaking, there would be no coverage for damage related to lack of power if there was no damage to the insured property itself,” he said. “In order to be covered for a power failure, the insured would require coverage known as ‘off premise power.’”

McGillivray said if history holds true, “insured damage for this event will not be as high as scenes of the damage may imply.” While damage is extensive, insured damage tends not to be extremely high. For example, the June 2014 tornado in Angus, Ont. damaged about 100 homes and caused about $48 million in insured damage. An August 2011 event in Goderich, Ont. caused insured damage of about $110 million.

The Canadian Press reported 51 homes were destroyed or severely damaged in Ottawa. About 215 buildings were damaged or destroyed in Gatineau.