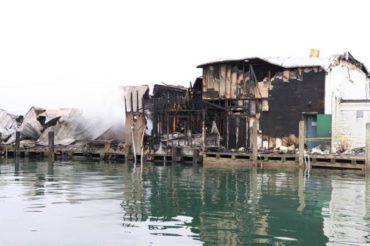 Areas were still burning under the metal roof on Thursday. Photo: @xpress_local.

Brad Connors, a division commander with the Halifax regional fire department, said a call came in at about 9:20 p.m. Wednesday that the Capital Seafood plant in Fisherman’s Cove in Eastern Passage was on fire.

He said firefighters initially had to stay outside the large structure and douse it with water because of the size of the fire, which quickly spread to the attic and breached the roof. He estimated the building was about 15 metres by 38 metres and contained equipment the international seafood retailer and exporter uses for processing fish.

“When crews arrived there was a lot of fire and smoke on the harbour side and flames were out through roof,” he said Thursday from the scene. “With the conditions and the fire load in the building, it grew to be quite an extensive fire.”

He said crews would remain on site to put out hotspots and use heavy equipment to remove pieces of the building so they can get closer to areas that are still burning. He said areas were still burning under the metal roof.

It wasn’t yet clear what caused the blaze, but investigators were due on scene. Deputy Chief Roy Hollett said one section of the building had collapsed on itself, while the other remained upright. He said fighting the fire was challenging because part of the building was on a wooden wharf and may collapse.

Hollett said the coast guard had been asked to install a boom to contain any debris that goes into the water.

“It’s on the edge of a wharf, so we don’t want anyone or building debris falling into the water,” he said.

Connors, who was at the fire through the night with about 30 firefighters, said no one was at the building at the time of the fire. It wasn’t thought neighbouring buildings were damaged.

No one from the company was available for comment, but the Capital Seafood website says it does between $10 million and $50 million in sales a year and employs up to 50 people.

Devastating fire. @PaulRPalmeter is in Eastern Passage, where the Capital Seafood plant is destroyed. pic.twitter.com/lQ9oEVgJuA