Amendments to the federal Railway Safety Act mandating recording devices, if passed into law, could provide “essential information” to Transportation Safety Board of Canada staff investigating rail accidents and could help prevent such accidents in the future, TSB suggested Tuesday. 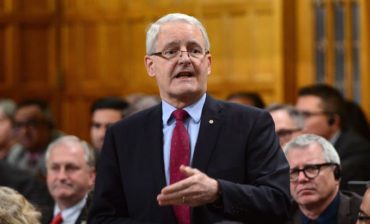 Transport Minister Marc Garneau responds to a question during Question Period in the House of Commons on Parliament Hill in Ottawa on Monday, May 15, 2017. THE CANADIAN PRESS/Sean Kilpatrick

Bill C-49, an omnibus piece of legislation, was tabled Tuesday in the House of Commons by Transport Minister Marc Garneau.

If passed into law, it would change the Railway Safety Act “to prohibit a railway company from operating railway equipment and a local railway company from operating railway equipment on a railway unless the equipment is fitted with the prescribed recording instruments and the company, in the prescribed manner and circumstances, records the prescribed information using those instruments, collects the information that it records and preserves the information that it collects,” according to a summary of Bill C-49 posted to the Parliament of Canada website.

This would mandate installation of locomotive voice and video recorders, TSB said in a separate release Tuesday.

“In the coming months, the TSB will collaborate with Transport Canada and key rail stakeholders to further clarify the rules and protocols required for the implementation of LVVRs,” TSB said in a release.

The lack of mandatory on-board voice and video recorders on locomotives was one of 10 issues on TSB’s watch list, released Oct. 31, 2016.

Bill C-49 “addresses a key safety issue” that has been on the watch list since 2012, TSB said in a release.

The watch list is a list of issues that TSB says federal regulators and law makers need to address.

In an investigation report released in 2003, TSB recommended Transport Canada, “in conjunction with the railway industry, establish comprehensive national standards for locomotive data recorders that include a requirement for an on-board cab voice recording interfaced with on-board communications systems.”

The recommendation was made in an investigation report into an incident in January, 1999 near Trenton, Ont. A passenger train had passed a signal indicating the train was supposed to stop. No one was injured, and there was no property damage other than “to the switch that was forced open by the train wheels as it passed through,” TSB stated in 2003.

Ten years later, TSB recommended that Transport Canada “require that all controlling locomotives in main-line operation be equipped with in-cab video cameras.” That recommendation was made in an investigation report into a derailment in 2012, northeast of Hamilton, that killed three crew members, and injured more than 40 other occupants of a VIA Rail passenger train. That train derailed near the Aldershot station while travelling 67 miles per hour in a 15 mph zone.

About 11 seconds before the train derailed, it passed a signal which displayed a “clear to slow” signal, meaning the speed limit is 15 mph. In its investigation report, TSB said the crew “may have … misinterpreted” that the signal displayed the “advance clear to limited” rule.

The absence of voice and video recordings from the cab “left a number of questions unanswered and represents a lost opportunity to mitigate potentially serious crew resource management issues in the industry,” TSB said in its investigation report. “A number of rail accident investigations in North America have led to findings or other communications identifying human factors as an underlying condition. However, many of these investigations would have further benefited from additional video recordings captured from the lead locomotive immediately prior to the accident.”

In September, 2016, the Canadian branch of International Brotherhood of Teamsters stated that railway companies should “not to be given access to the recordings because that would be an unprecedented and unparalleled intrusion into the workplace, one that is unnecessary, and would be tantamount to violating workers’ right to privacy.”

Bill C-49, if passed into law, would change the Canadian Transportation Accident Investigation and Safety Board Act to “allow the use or communication of an on-board recording … if that use or communication is expressly authorized under the Aeronautics Act, the National Energy Board Act, the Railway Safety Act or the Canada Shipping Act, 2001,” according to background on the bill on the Parliament of Canada website.

That amendment, if passed into law, “will remove the current legislative barrier that precludes anyone but the TSB from using on-board voice and video recordings and pave the way for the use of these recordings for proactive safety management purposes as specifically permitted” by the Railway Safety Act, TSB said in a release May 16, 2017.

“On-board recordings will however continue to be privileged under the CTAISB Act in order to protect worker privacy,” TSB added.

In addition to locomotive voice and video recorders, three rail safety issues made the watch list in 2016.

TSB contends that crew fatigue “continues to pose a risk to the safe operation of trains, particularly freight trains.” TSB also warns that current railway practices are “not adequate to mitigate effectively the risk posed by the transportation of large quantities,” by rail, of dangerous goods such as crude oil. The fourth watch list item following railway signal indications.

TSB is calling for Transport Canada to mandate “additional physical defences that ensure signals are consistently recognized and followed.”

The investigation agency reiterated this recommendation in January, 2017 when it released an investigation report on a collision Sept. 6, 2015, between freight trains in British Columbia. One train entered a siding while another going in the opposite direction passed a stop signal and struck the side of train that had entered the siding. Three minutes before the collision, the moving train had passed a signal displaying a Clear to Stop signal.

Some railways in Europe and the U.S. “have train control systems that will sound an alarm in the locomotive cab or even stop the train in the event that the crew does not respond appropriately to a signal displayed in the field,” TSB said on its watch list web page for 2016. “However, similar technology has not yet been implemented on any federally regulated railway in Canada.”

TSB has noted in the past that the Toronto Transit Commission has trip arms on its subway trains. Those arms are designed to drop and activate emergency brakes TSB said at the time.

A “penalty brake” system has been in place since 1952 on Amtrak’s northeast corridor in the U.S., TSB noted in 2013 in its report on the fatal 2012 derailment near Hamilton.