Mandatory evacuations have been issued for 500 residences in northeastern California after a wildfire began early Friday morning. 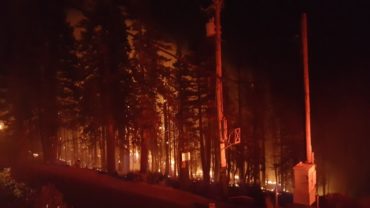 The Emerald Fire has forced the evacuation of 500 residences in California. Photo: @CAL_FIRE.

The California Department of Forestry and Fire Protection (Cal Fire) said in a statement on Friday that voluntary evacuations have been issued for an additional 500 residences. Two evacuation centres have been opened and nearly 20 roads have been evacuated.

The so-called Emerald Fire in El Dorado County – off Highway 89, near Cascade Lake and Emerald Bay and near the Nevada border – is currently 200 acres and 25% contained, Cal Fire said in the statement.

The Associated Press reported that hundreds of firefighters are battling the “dangerous wind-whipped wildfires” at Lake Tahoe and in the valley between Carson City and Reno. “A bigger fire that broke out at about 2 a.m. has grown to nearly two square miles in the Washoe Valley south of Reno,” AP added. “That fire is being fueled by winds gusting up to 76 [miles per hour]. It has forced evacuations, closed roads and schools and left thousands without power,” AP said, noting that dozens of homes are threatened and at least one structure has burned. More than 5,000 people are without power, mostly in southwest Reno.

In an afternoon update, AP said that more than a dozen homes in Nevada, and possibly up to 18, had been destroyed. Dozens more remained threatened, AP said. Washoe County has also declared a state of emergency.

Last month, a heat wave worsened a wildfire that burned buildings and forced people from their homes in remote communities along the Santa Cruz Mountains. The blaze in a rugged area about 30 miles south of San Jose destroyed two houses and charred more than three square miles of dry brush and timber, Cal Fire reported on Sept. 27.

On Aug. 30, AP said that a wildfire that tore through brush east of Los Angeles, in Banning, Calif., forced 700 people from their homes and destroyed a small building.

.@ShannonKOLO8 Early detection of the #EmeraldFire is up on WV. Visit https://t.co/LFFAtuNZeL for a direct map view. Stay safe! pic.twitter.com/hovp5rKtRl

SR-89 closed from Fallen Leaf Rd to just north of Vikingsholm due to Emerald Fire. Closure in effect for possibly 24-48 hours pic.twitter.com/bdhZ1cNgW8

#EmeraldFire [update] All evacuations remain in place except for areas North of Bayview Trailhead. https://t.co/LEy2yUz4NJ pic.twitter.com/qsxmlMG6Da