Manitoba Public Insurance (MPI) said on Friday that it has asked the Public Utilities Board for a 2% increase to Basic Autopac rates, citing an “unprecedented” year for comprehensive (non-collision) claims payouts. 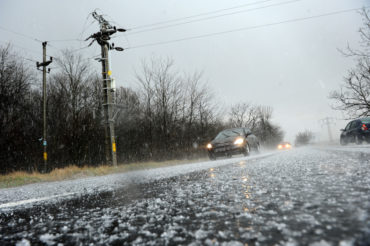 Basic Autopac is an all-perils coverage that insures a vehicle and any permanently attached equipment against accidental loss or damage in Canada or the United States. It covers damage from collision, upset (a vehicle tips or rolls over), and other causes (comprehensive), such as vandalism, theft, hail and fire.

“The corporation experienced an unprecedented 68% increase in comprehensive claims costs,” Dan Guimond, president and chief executive officer of MPI said in the statement. “Hail claims were the big driver in this increase, coming in $50 million over our projected forecast. Last year’s payout for comprehensive was $125 million, compared to the previous five-year average of $74 million.”

There were approximately 13,000 hail claims opened last year, compared to about 4,000 in 2014, MPI said. A number of financial factors had a negative influence on the corporation’s overall financial performance in its 2015 fiscal year, the statement said. For example, forecasted return for Canadian and U.S. equities was $14 million, or 17%, below previous forecasted amounts. Investment income for Basic Autopac was $6 million below previous forecasted amounts.

The corporation’s financial strength was “somewhat stabilized” with the transfer of $72.7 million to the Basic rate stabilization reserve from non-Basic lines of business. Ongoing efforts to control costs and reducing operating expenses have also mitigated the effect of rising claims costs and lower investment income.

“Higher claims costs and a negative financial climate resulted in the corporation seeking a small overall rate increase for next year,” Guimond said in the statement. “Manitoba Public Insurance collects premiums to reflect projected claim costs, and we are addressing the business reality that claims costs are continuing to rise.”

If approved, this will be only the third overall rate increase in the last ten years, MPI reported. The proposed rates will be effective March 1, 2017, but because renewal dates are staggered, some vehicle owners won’t pay the new rates until February 28, 2018.

MPI has also requested a 1.7 per cent overall average decrease to motorcycle rates. If approved, the rates for 77% of motorcycles will decrease or remain the same, while the rates for 23% will increase. In total, 11,699 motorcycle owners – the majority of which are registered in Winnipeg and central and western Manitoba – will receive a decrease in their premiums. Mopeds and small-engine displacement motor scooters (2,553 units) rates would increase an average of $9 to $313 per year, up from $304. Guimond added that over the last five years, motorcycle rates have decreased overall by 19.8%.

In addition to an overall 2% increase in Basic Autopac rates for 2017, MPI has requested that the Public Utilities Board consider introducing an Interest Rate Forecast Risk Factor, effective March 1, 2017, the form and magnitude of which would be developed through a collaborative process with the board and intervenors. “The purpose of the risk factor would be to mitigate the risk of a significant premium increase in the future, due to year-over-year underperformance of interest rates against the forecasts established by the major Canadian banks, and which has an ongoing effect on the corporation’s ability to achieve investment income forecasts.”

This week, MPI released its 2015 annual report, declaring a net loss from operations of $31.3 million. A $4.7 million investment income loss reflected the current market conditions around equities and bonds.