The wildfire program of Manitoba Sustainable Development (MSD) said on Thursday that evacuation orders have been issued by the communities of Easterville and Chemawawin Cree Nation, 450 kilometres north of Winnipeg, due to smoke and threats from fires that have moved to within half a kilometre of the community. 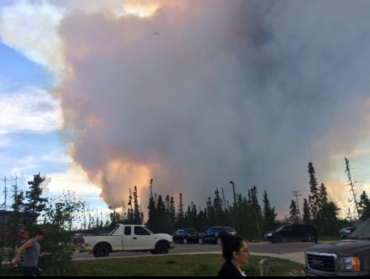 Evacuation orders have been issued by the communities of Easterville and Chemawawin Cree Nation due to smoke and threats from fires that have moved to within half a kilometre of the community. Photo: @lilly_006.

Fire crews are working on three fires in the area, with ground attack, as well as two water bombers, MSD said in a press release. An update from the government of Manitoba on Thursday evening said that nine helicopters, six water bombers and 91 “extra firefighters” were engaged in fire suppression activities.

The update said that the north half of the province remains relatively dry with “lightning occurring throughout. Lightning continues to start new wildfires throughout the north.”

The size of the fire is estimated at 350 hectares, MSD said in an update on Friday. There were no reports of losses to buildings or infrastructure. Nineteen new wildfires, all caused by lightning, were reported on Thursday in the following areas: Leaf Rapids (nine); Lynn Lake (four); Wabowden (two); Gillam (three); and Oxford House (one).

In Manitoba, a total of 119 wildfires have been recorded to date, less than the average for this date of 236, MSD reported. By Thursday, the wildfires had burned 83,639 hectares.

Fire too close to home in #ChemamawinFN aka Easterville MB in #MKO territory Ppl had to leave for safety precautions pic.twitter.com/sBj3qZ77u7

Forest fire by Easterville. About an hour away from here.
Photo by Cindy Ferland. pic.twitter.com/IsLinnuTIj