The mayor of the city of Kenora in northwestern Ontario declared a state of emergency on Monday as a result of major flooding over the past weekend. 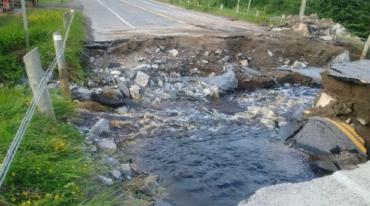 Kenora saw more than 109 millimetres (mm) of rain over a two-day period, resulting in more than 20 roads experiencing moderate to extensive road damage, the city said in a press release. From Friday, June 24th at 1 p.m. to Saturday, June 25 at 8 a.m., Kenora received 82.6 mm of water, the release said, and one road, Veterans Drive, remains closed with a “complete washout.”

“This severe downfall, caused many of our secondary roads to flood, and many are still water covered while roads crews continue to work on the damages from the rainfall,” said Mayor Dave Canfield.

While the city is diligently working to repair the roads, Veterans Drive, a main entrance into the city will remain closed until the necessary culverts can be obtained for replacement, the release added. Crews anticipate being able to reopen the road by the Canada Day long weekend.

The state of emergency came two days after another city in northwestern Ontario, Thunder Bay, suffered surface flooding following heavy rainfall on June 25. The Lakehead Region Conservation Authority reported up to 92 mm of rain fell in the city on Saturday. In addition, a total of 227 calls were received through the city’s dispatch centre, related largely to surface and basement flooding, the city of Thunder Bay said in a statement on Sunday.

Patrolling of ditches and roadways continued into the early morning hours of Sunday, and minor locations of erosion on roadways have been identified and were to be inspected that day. No major failures to city infrastructure were reported.

On Monday, a voluntary evacuation of homes and cottages in southern Manitoba near the Ontario border remained in effect days after a heavy rain event caused flooding and road washouts. Manitoba Sustainable Development reported that the voluntary evacuation was first issued on June 25. A number of regional roads in West Hawk, Falcon Lake and the Whiteshell areas remain flooded or damaged.