Although Typhoon Meranti weakened significantly as it approached China, it still came ashore with a central pressure of 940 mbar, the equivalent of a Category 4 hurricane – the strongest typhoon in the region since 1949, according to catastrophe modelling firm AIR Worldwide. 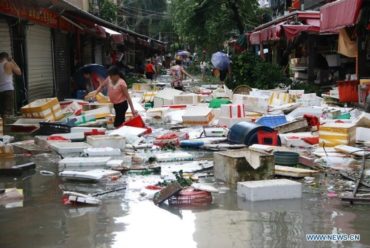 Typhoon Meranti passed south of Taiwan on Sept. 14 and made landfall at 3:05 a.m. local time on Sept. 15 in the Xiang’an District of Xiamen City, in eastern China’s Fujian Province, AIR said in a press release on Thursday.

It was the strongest typhoon to approach Taiwan since Typhoon Bilis in 2000.

Risk Management Solutions, Inc. (RMS) reported in a statement, also released on Thursday, that the storm caused approximately 650,000 power outages in Taiwan, prompted evacuations and caused disruption to transport and business, as well as toppling pylons, trees and vehicles. Damage reports are still emerging from China, but reports indicate that streets have flooded in the city of Xiamen, 1.65 million people have lost power in Fujian Province and tens of thousands of people have been evacuated.

The Associated Press reported that at least eight people have died as of early Friday morning.

Couldn't ask for a better Geocolor satellite picture than this. #Meranti #tropics pic.twitter.com/0K7ksi3hDu

“Meranti, the strongest typhoon this year, has struck Taiwan and China with a triple-whammy of typhoon-related perils: a combination of wind, flood and storm surge,” said Robert Muir-Wood, RMS’ chief research officer, in the statement. “The storm has now moved inland and weakened, while continuing to produce high rainfall totals and flooding. We expect damage in China to be higher than Taiwan, due to the mainland’s higher concentrations of coastal exposures and population. While the storm at Cat 4 intensity skirted the southern end of Taiwan island, it made a direct hit at Cat 3 intensity on the mainland. Close to the point of landfall in the island port of Xiamen there has been quite significant wind damage, including to the windows of high-rise buildings in addition to the more familiar rainfall related and storm surge flooding.”

Dr. Peter Sousounis, AIR’s assistant vice president and director of meteorology, added that “Fujian is one of the Chinese provinces most often affected by typhoons, but exposures in the province are somewhat protected by Taiwan, which lies directly to the east across the Taiwan Strait. “Although storms that interact with the mountainous terrain of Taiwan may regain typhoon status before making landfall on China’s mainland coast, they are typically weakened,” he said. “Even these weakened storms, however, can bring heavy rainfall and significant flooding, which can contribute more to insured losses than typhoon winds.”

The region experiences 10 times as many weak typhoons as strong ones, AIR added. Meranti weakened considerably after making landfall on mainland China, but “it is still capable of delivering dangerous wind gusts and heavy precipitation.” 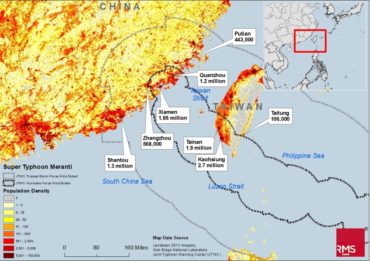 In advance of the typhoon, the China Meteorological Administration issued its highest alert warning and the National Marine Environmental Forecasting Center upgraded its warning for ocean waves to “red.” Fishing boats were recalled and ferry services suspended. Many flights and train services were also cancelled. Schools and kindergartens in coastal cities closed and tens of thousands of people were evacuated, disrupting the three-day mid-Autumn festival holiday.

The cities of Xiamen and Quanzhou are experiencing widespread power outages, flooding, disrupted water supplies and fallen trees, AIR said, and windows on some tall buildings reportedly shattered. A Song dynasty wooden bridge has been washed away in Yongchun County, and three historic bridges, similarly about 800 years old, have been damaged in Quanzhou. Fuzhou, the capital of Fujian, is experiencing particularly severe flooding. Mudslides are likely across the region, AIR said.

According to AIR, most urban dwellers live in mid- or high-rise apartment buildings, many of which have commercial establishments on the ground floor. Mid-rise buildings are often confined masonry, while high-rises tend to be reinforced concrete. China has a diverse commercial/industrial building stock, which is generally more resistant to wind and water damage than residential buildings. Historically, the dominant construction types in China are unreinforced masonry made from adobe or brick, or brick with a light wood frame.

RMS noted in the statement that high winds affected the port and industrial cities of Kaohsiung and Tainan in southwest Taiwan. Here, the industrial clusters are dominated by the light industrial electronic, semiconductor and the bio-tech sectors. The buildings in these sectors are generally designed to withstand typical extreme typhoon winds and from RMS field surveys “buildings in industrial parks are sited on elevated ground to minimize flood risk, while the buildings themselves have stepped entrances, which further increases protection against flooding,” Muir-Wood said. “While Meranti skirted past the east coast of Taiwan, early indications are that hurricane force winds toppled some cargo containers in the Kaohsiung port, while some ships have come unmoored. The industrial clusters may also have suffered peripheral impacts.”

RMS research showed that it is generally expected that wind damage will remain confined to non-structural damage among multi-family, commercial properties, while single family dwellings will suffer “relatively more damage and industrial properties relatively less given their economic importance.”

Suomi NPP captured these day/night and infrared images of Typhoons Meranti and Malakas in the Pacific on 9/14 pic.twitter.com/JNKfIG4Hky

For China, Muir-Wood said, the low take-up rates for wind and flood insurance will limit the insurance impacts of the storm. “However, this was the strongest storm to hit Xiamen in more than sixty years and something like a ten-year return period storm for this section of the Southeast China coastline.”

RMS’ vice president of capital markets, Ben Brookes, added that Meranti is another reminder of the “huge potential” for insurance-linked securities in the region. “It would be relatively straightforward to put parametric protection in place for an event like this. Category 4 and 5 storms that have the potential to strike regions of high populations and exposures are exactly the type of event such protection can be designed for, particularly if issued by a state sponsor.”

#Typhoon #Meranti made landfall at 3:05 a.m. in Fujian Province with gales up to 48 meters per second pic.twitter.com/yEiqMxrgw1