HALIFAX – A winter storm lashed the Maritimes with strong winds, snow and ice pellets on Tuesday, causing power outages and forcing the closure of schools and businesses.

Snowfall and winter storm warnings were issued for much of the region, though most of Nova Scotia was drenched in heavy rain by the afternoon as the wind gusted over 90 kilometres per hour in the Halifax area.

Around 1 p.m. local time, the wind was gusting at 93 km/h at the Royal Canadian Navy’s HMC Dockyard, which is on the Halifax waterfront.

And around the same time in northeastern Cape Breton, a peak gust hit 129 km/h in Grand Etang, a small village notorious for wild winds known as Les Suetes. 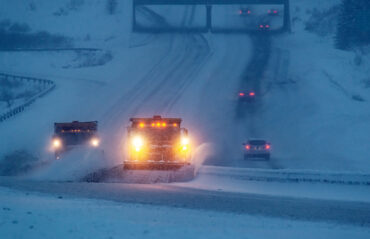 Power outages were reported along Nova Scotia’s Atlantic coast and on New Brunswick’s Grand Manan Island, where about 2,000 people were without electricity at noon local time.

More than 8,000 people were in the dark in Nova Scotia just before 3 p.m., most of them along the province’s Atlantic coast. Nova Scotia Power issued a statement saying it had 300 field technicians and contractors stationed across the province ready to respond to the storm.

“We are expecting significant heavy wet snow, rainfall and winds up to 100 km/h across the province,” said Lia MacDonald, the utility’s vice-president of transmission, distribution and delivery. “We want our customers to know we are ready, and we are responding as it is safe to do so.”

Meanwhile, up to 45 centimetres of snow was in the forecast for northern New Brunswick, but the snow was expected to transition to ice pellets later in the day.

As the storm trudged across the three provinces, the list of cancellations continued to grow.

In Prince Edward Island, up to 25 cm of blowing snow was in the forecast for the central part of the Island, followed by a period of ice pellets and freezing rain. “Rapidly accumulating snow will make travel difficult,” Environment Canada warned Islanders.

Feature image: A pedestrian braves the elements in downtown Halifax on Tuesday, Feb. 2, 2021. Snow, rain and high winds forced school closures and disrupted transportation. Rain and wind warnings have been issued for Nova Scotia’s Atlantic coast, where damaging gusts could reach up to 100 kilometres per hour. THE CANADIAN PRESS/Andrew Vaughan