December 19, 2016   by Mike Blanchfield and Jim Bronskill - THE CANADIAN PRESS

OTTAWA – The federal government is determined to improve aboriginal housing, Indigenous Affairs Minister Carolyn Bennett said Friday after an Ontario chief blasted Ottawa for a lack of action following a deadly blaze that killed a family of five. 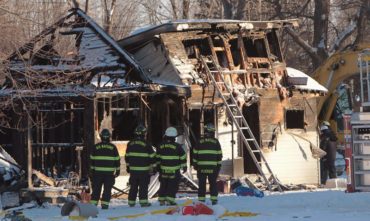 Fire fighters and Ontario Fire Marshall officials attend the scene of a house fire on Oneida Nation of the Thames, southwest of London, Ont., Thursday Dec. 15, 2016. A First Nation Chief in Ontario is expected to release more information about a house fire that has left some of its residents unaccounted for. THE CANADIAN PRESS//Dave Chidley

The government had already rejected a plea for money to upgrade 50 houses at the Oneida Nation of the Thames, Chief Randall Phillips told a news conference Thursday after the fire, which is believed to have killed four young children and their father.

Phillips said the two-storey home on the reserve near London, Ont., was old and “basically kindling” before it caught fire. It also might well have been on the list of homes the reserve was hoping to upgrade, he added.

Bennett said Friday she has “reached out” to Phillips and offered her “steadfast” commitment to ensuring the safety of First Nations communities.

“Our government is committed to closing the unacceptable housing gap for indigenous people,” she said in a statement.

“The wide-reaching need for improved infrastructure – like housing, community centres, and fire protection services – is a result of years of chronic underfunding.”

The housing woes have a direct impact on all other social issues that affect aboriginal people, said Romeo Saganash, the federal NDP’s indigenous affairs critic.

“Violence, suicide, the low rate of education attainment, these are all directly related to the lack of housing in the communities,” he said in an interview.

Bennett has said the federal government doesn’t know how many indigenous people die in fires on reserves because it no longer collects such statistics.

The collection of fire data was stopped six years ago to ease the “reporting burden” on First Nations communities, the minister said in written responses to questions recently tabled in Parliament.

She said her department would work with partners, including the Aboriginal Firefighters Association of Canada, “on new options to address the fire data gaps on reserve.”

“All options to generate this data are on the table so we can ensure the right programs and policies are in place to keep First Nations communities safe.”

Manitoba Liberal MP Robert-Falcon Ouellette asked Bennett for a breakdown of the number fires per year on reserves, as well as the number of deaths and injuries. He also wanted to know how much was spent on fire prevention on reserves.

In her written response, Bennett said that 2010 was the last year in which fire statistics were collected.

“A decision was taken to stop collecting data on fire incidents on reserve in order to reduce the reporting burden on First Nations.”

She said “changes were made to the reporting cycle” in 2011, “which included eliminating the tool by which First Nations reported this information.”

The new policy took time to take effect, so some communities may have submitted data up to 2013. But that information “was neither analyzed nor published and it is incomplete,” Bennett said.

While the government may not have a clear picture of fire-related deaths in aboriginal communities, there has been plenty of anecdotal evidence.

An internal federal government obtained earlier this year by The Canadian Press found that First Nations residents were 10 times more likely to die in a house fire than people living off reserve. The 2011 report also said that the fire rates for First Nations were 2.4 times higher than for the rest of Canada.

The report was examining insurance coverage for First Nations and found almost half across Canada had “little to no fire protection,” while many relied on poorly trained volunteer firefighters.

More News
Related
Recent earthquakes a reminder that events can happen anywhere: I.I.I.
IBC encouraging policyholders to discuss policy limits with insurers as B.C. wildfires continue
ICBC reports 124 claims and $500,000 in costs from wildfires to date
Number of lightning-related homeowners insurance claims in the U.S. up in 2016, but average cost for insurers down: I.I.I.