Learning is a life-long process and not just for humans – online chatbots can also continue to learn and become smarter, attendees to the Insurance-Canada.ca Broker Forum (ICBF) heard on Wednesday. 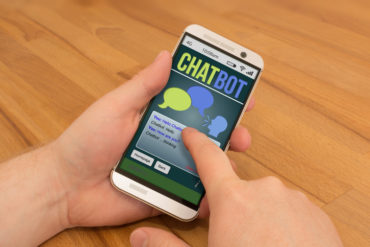 Amanda Ketelaars, operations manager with Whitby, Ont.-based Mitchell & Whale Insurance Brokers shared her brokerage’s experience with their chatbot at the ICBF, held at the Allstream Centre in Toronto.

Powered by rules and a form of artificial intelligence called natural language processing, which understands the intent of a question, the English language chatbot can give a quote, take a claim, set up a call and take a change request, among other services.

“Each conversation is giving the chatbot some chance to learn,” Ketelaars said during a session titled Chatting it Up with Customers. Unlike humans, the chatbot can manage several conversations at once and can answer quickly, but “it still does require some time in learning,” she said.

While most questions were handled effectively by the bot itself, some conversations do go bad, Ketelaars told delegates. She used the example of a client who referred to right-hand drive vehicles by asking, “Do you insure RHD vehicles?” While the bot realized the person was asking for an auto quote, it didn’t understand it was a specialty vehicle.

“So the conversation: ‘Did you not get my first message?’ and the chatbot went: ‘How can I help you today?’ and then down that path,” Ketelaars related. “Funny enough, they don’t always know they are talking to a robot. RHD is a specialty vehicle. The bot is going to learn that. Next time, the bot will respond with, ‘We will get you a specialty quote.’”

Ketelaars added that “there is now a little bit more human intervention,” and during normal business hours, the brokerage has “someone watching who can jump in if it’s going south.” The bot will also use some machine learning, a lengthy process that can involve millions of questions. And since some people didn’t realize they were speaking with a robot, the bot has now been named an “insurance robot” and users are instructed to “Say hi to start.” 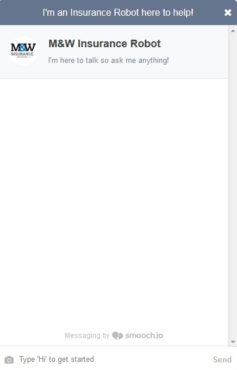 Another thing the brokerage learned was that when the bot didn’t know what to do, it asked users if somebody could call them. “The answer almost 100% of the time was ‘nope,’” Ketelaars said. “What we realized is they reached out to us in a medium of messaging, so our response now is, ‘Would you like someone to text you or email you back?’ and the response to that now has been almost 100% yes because we are staying within the medium they want.”

In the first month of using the bot, Ketelaars reported, the brokerage saw more than 51,000 messages through the chatbot, with each chat consisting of an estimated 20 to 30 messages. Seventy per cent of those messages during the 30-day period were for quotes, 20% were for frequently asked questions and 10% were for policy changes, Ketelaars said, adding that 65% occurred during business hours and 35% were after business hours.

Global claims adjuster Crawford & Company was another company that shared its experience dealing with technological change in the industry at the ICBF.

“None of these people are licensed adjusters, but they do all the tasks that go with adjusting a claim,” Gardner said.

Traditionally, if an adjuster needs to take a look at a house fire, for example, he or she would perform the manual work. “Why does it have to be an adjuster doing all the front-line work?” Gardner asked. “The reality is so much of this is automated now. All I need is somebody to take the picture, so it’s either the policyholder or a looker. We see this as a revolutionary way to go into the marketplace with a variable workforce.”