VANCOUVER – Temperature records are melting across British Columbia as a prolonged heat spell grips the province but Emergency Management BC says it is not anticipating an extreme heat emergency.

A statement from the agency says residents should monitor temperature forecasts and take advantage of cooling stations set up in many communities but it’s not expecting a repeat of last year’s deadly heat dome that killed more than 600 people.

Environment Canada is maintaining heat warnings for most of B.C. and says 10 daily maximum temperature records were broken Wednesday as the province recorded the top dozen highest temperatures in Canada.

At 42 C, Lytton was the hottest in the province and the country as the weather office says the village broke its previous record for the day of 40 C, set in 1939.

Records tumbled in all corners of B.C., from Vancouver to Bella Bella, Fort St. John and Nelson, and while Pemberton’s 39.5 C did not set a record, it tied for fourth-hottest community in Canada, prompting a flood watch for the nearby Lillooet River.

The River Forecast Centre issued the watch for the Pemberton area and Lillooet River system as high elevation snow and glaciers melt, causing what the centre expects will be the highest recorded late-July flows in that region since those measurements began in 1914.

The centre also issued a high streamflow advisory for the Squamish and Elaho rivers and other glacially influenced rivers and creeks in the Sea-to-Sky region north of Vancouver. 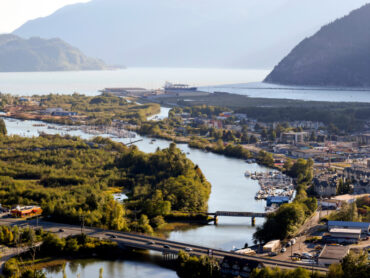 “Although rivers and creeks in the Sea-to-Sky are unlikely to reach peak flood levels experienced typically from rain and rain-on-snow events in the fall, the upcoming flows are expected to be the highest experienced in late July,” the River Forecast Centre said in a statement issued Wednesday.

“Extreme caution should be taken for those travelling to the backcountry during the current heat event,” it said.

“This week and as we head into the B.C. Day long weekend, we are seeing warm temperatures in many parts of the province,” Farnworth said in a statement to The Canadian Press.

“I encourage everyone to stay cool and if you know someone who might be at a higher risk for heat illness to check in on them. Many municipalities are opening cooling centres, please check with your municipality, regional district or First Nation for the most-up-to-date information.”

No campfire bans have been imposed in any of B.C.’s six fire centres as the B.C. Day long weekend approaches, but the BC Wildfire Service warns the heat wave is creating potentially dangerous conditions.

“Recent warm and dry conditions indicate fires that start in the coming days are more likely to show increased fire behaviour and faster spread rates as forest fuels continue to dry out,” the wildfire service said in a social media post.

The fire danger rating for most of B.C. was ranked as “high” on Thursday, with a large section of the southeast fire centre ranked as “extreme.”

The forecast for Thursday included the chance of afternoon thunderstorms over the south Cariboo, North Thompson and Kamloops, while details on the wildfire service website showed 40 active blazes in B.C., with 12 sparked since Tuesday.

Only one wildfire of note was listed in the province and the wildfire service warned Thursday that the nearly 24-square kilometre blaze burning west of Lytton could see flare in the coming days as temperatures in the area remain above 40 C.

But fire officials also described the flames as “stable” as often gusty winds around Lytton had died down Wednesday.

More News
Related
Damage to reputation/brand gets social, cyber jumps higher on risk list: Aon survey
How to start a kitchen flood claim with the wave of a paw
Alert Ready system expands to floods, fires in B.C., not heat domes
P&C industry must get better at modelling secondary perils: reinsurance exec