The direct insurance costs associated with distracted driving in Manitoba are estimated to be at least $70 million per year, the province’s government auto insurer reported recently. 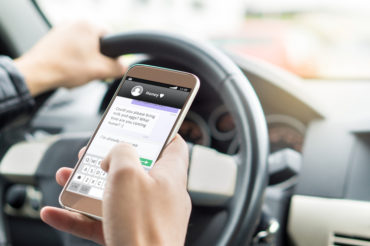 That figure ultimately affects the insurance premiums that all vehicle owners pay, MPI added in a press release.

“If there is a collision that had any of those factors, it would be determined to be a distracted driving-related collision,” Smiley said.

On April 5, MPI announced that it was once again funding a “highly successful” road safety initiative aimed at drivers who continue to illegally use hand-held electronic devices while driving. MPI is providing approximately $200,000 in funding to support enhanced police enforcement programs, which began earlier this month and will run throughout April, with additional campaigns planned for July and the fall.

The campaign is a joint initiative between the insurer, RCMP and police services in Winnipeg, Brandon, Winkler, Morden, Rivers, Altona and Dakota Ojibway.

Over the past seven years of campaigns, nearly 10,000 provincial offence notices were issued by law enforcement. “This is clear indication that more work is required to address growing concerns about distracted driving,” Ward Keith, vice president of business development and communications with MPI, said in the release.

Police enforcement activities supported by MPI will include both traditional roadside enforcement and more “creative” tactics, the release noted. One such tactic recently announced by the Winnipeg Police Service involves placing officers on transit buses to observe drivers who may be using their cellphones while driving.

More News
Related
CU Total Loss Series: Where are the bottlenecks?
How Aviva will cover Lyft in Canada
What Ontario needs to do to reduce auto insurance costs
Auto fraud getting worse, insurer says