How much this province’s “historic” flooding will cost the industry

Spring flooding in New Brunswick may have been “historic” and “record-setting,” but it didn’t meet the $25-million threshold of a catastrophe event.

Catastrophe Indices and Quantification (CatIQ) told Canadian Underwriter Monday the flooding was a “notable event,” meaning it caused between $10 million and $25 million in property damage. 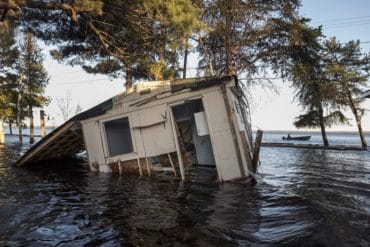 A cottage rests toppled in water after being battered by floodwater from the Saint John River on Grand Lake in New Brunswick on Friday, May 11, 2018. THE CANADIAN PRESS/Darren Calabrese

At the time, Canadian Press reported that hundreds of people were evacuated, about 12,000 properties were affected by widespread flooding and dozens of homes and cottages were “beyond repair.” At one point, the Saint John River rose to 5.7 metres above sea level (flood stage is 4.2 metres).

Amanda Dean, vice president of the Atlantic region for Insurance Bureau of Canada (IBC), said Monday the flooding covered “quite an extensive piece of geography,” affecting homes and cottages. But although it was devastating for insureds, it wasn’t a huge claims event, she said.

Why not? Partially because New Brunswick is much more densely populated than major cities such as Toronto, which recently saw between 50 and 75 millimetres of rainfall in two to three hours across parts of Toronto on Aug. 7. Global News meteorologist Ross Hull said at the time that the normal amount of rainfall for the entire month of August is 78.1 mm.

CatIQ said no claims data is available yet for the latest round of flooding in the province. Dean said that while IBC did outreach and made sure people knew about the consumer information line, “we didn’t get one call.”

The recent heat wave combined with last week’s high humidity triggered a series of severe thunderstorms throughout parts of New Brunswick. Media reported roof damage and other damage from wind and fallen trees. Plus, a rare tornado warning was issued by Environment Canada for northwestern New Brunswick.

“It’s very odd to hear of a tornado warning in the province,” Dean said, who said it’s not believed that the tornado touched down.

Glenn McGillivray, managing director of the Institute for Catastrophic Loss Reduction (ICLR), said New Brunswick has experienced about 10 tornadoes from 1879 to 2013, with the majority being on the low scale (F0s to F1s, or light or moderate damage). New Brunswick gets the highest number of tornadoes of the Atlantic provinces because it is the westernmost of the eastern provinces.

Are parts of New Brunswick seeing more extreme weather and incidents like tornado warnings? “At present, no definitive link has been made between tornadoes and climate change, and there is no suggestion that convective storms are worsening in New Brunswick,” McGillivray said. “There is some research that says that tornadoes may become more common in the northeast due to climate change, but this research is not developed.”