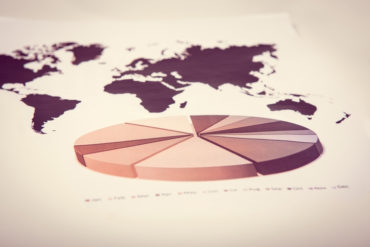 The release noted that property-casualty reinsurance contributed 340 million euros to the result for the first three months of the year, down from 425 million euros in Q1 2016. At 97.1% of net earned premiums, “the combined ratio was good, and on track to achieve the Munich Re target level of 97% for the full year,” the release said. “Owing to a number of losses just below the major-loss threshold, the first quarter saw an increase in the basic loss ratio in particular.” The combined ratio for Q1 2016 was 88.4%.

As claims notifications for basic losses from prior years remained appreciably below the expected level overall, Munich Re was able to release reserves in the amount of approximately 250 million euros, corresponding to six percentage points of the combined ratio.

Pressure on prices, terms and conditions remained intense in the renewals as of April 1, although there was a slight easing. A premium volume of about 1.7 billion euros was up for renewal at April 1, compared to about 9 billion euros in January. Around 14% of this business was attributable to the Japanese market, a further 42% to North America and global business, and about 35% to Europe. At 24%, natural catastrophe business – which has been particularly subject to price pressure – accounted for a high percentage of this volume, Munich Re reported.

The overall decline in prices was 0.5% for the April renewals, and “thus much less pronounced than for the renewals as at April 2016.” Munich Re was able to take advantage of selective opportunities in certain markets, such as in Japan. Premium volume fell to approximately 1.5 billion euros.

The renewals at July 1 2017 mainly involve treaty business in the United States market and in Australia and Latin America, with a premium volume of around 2.1 billion euros up for renewal, and with natural catastrophe covers accounting for approximately 19%. “Munich Re expects the business environment to remain competitive provided the market is not affected by major loss events,” the release said. 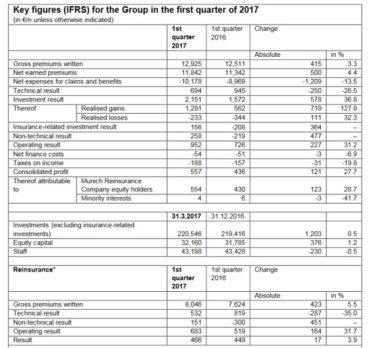 For Munich Re’s ERGO field of business, the first quarter saw a result of 91 million euros compared to a loss of 12 million euros in Q1 2016. All three primary insurance segments – ERGO Life and Health Germany, ERGO Property-casualty Germany, and ERGO International – were able to improve on their results year-on-year, Munich Re reported. The operating result increased by 30.2% to 269 million euros from 207 million euros in Q1 2016. The combined ratio for the Property-casualty Germany segment worsened to 99.1% from 98.6% in the first three months of 2016, while the figure for the International segment deteriorated to 96.3% (94.3%) for the same period.

Munich Re reported that expectations for 2017 have not change in comparison with figures given in the 2016 annual report published in March. Munich Re still anticipates GPW of between 48 and 50 billion euros for the 2017 financial year, and is expecting to generate a consolidated result for the year in the range of 2.0 to 2.4 billion euros.

Munich Re chief financial officer Jörg Schneider said in the release that the company is “very pleased” with the profit for the quarter of 557 million euros and is on track to meet its profit target for the full year. “We achieved a gratifying quarterly result despite a significant increase in major losses, and this was due in large part to the good investment result,” he said. “The development of business was particularly positive in life and health reinsurance, where the technical result was higher than we had expected. ERGO saw improved results in all segments.”