DAVIDSON, Sask. – Parts of south-central Saskatchewan have been hammered with hail, heavy rain and even a twister. 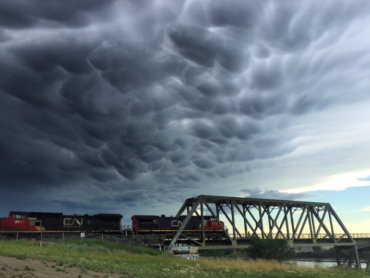 During a public alert issued Tuesday night, Environment Canada said a tornado had been reported touching down in a rural area near Davidson, Sask., and pictures posted to social media showed downed trees.

Ricky Forbes, a storm chaser with CMT’s show “Tornado Chaser,” saw the twister reach land but said it “wasn’t on the ground too long.”

Throughout the evening, Environment Canada issued tornado warnings for communities such as Outlook, Moose Jaw, Fort Qu’Appelle and the Rural Municipality of Indian Head.

@KMacTWN These photos are 10 minutes apart… Just shows how quickly that exploded over #Regina! #SKstorm pic.twitter.com/XOF4C6Voaq

Heavy rain and hail the size of baseballs were being reported in various communities, and lightning was causing power outages in Regina while power lines had been snapped in some smaller towns.

The region had experienced hot temperatures of 30 C and high humidity on Tuesday.

Though Forbes said the tornado was on the smaller side, he still called it intense.

“Even small tornadoes can be very dangerous,” he said.

“It’s tough, unless you’re very close, to know how fast these wind speeds are, and that’s the danger is the wind speeds of these tornadoes. I can’t tell you for certain how much damage it could have done, I did see it touch ground, I did see dirt fly up.”

The storm system was expected to move into southwest Manitoba during the overnight hours.

We found the odd softball one just west of outlook #skstorm pic.twitter.com/Vdv2TD0zDy

A lot of big trees down in Davidson #Sask after tornadic storm cell passed over. #skstorm pic.twitter.com/J4qYfUFDLb