Munich-based Allianz reported its p&c operations had a combined ratio 96.4% during the three months ending June 30, compared to 93.5% during the same period in 2015. 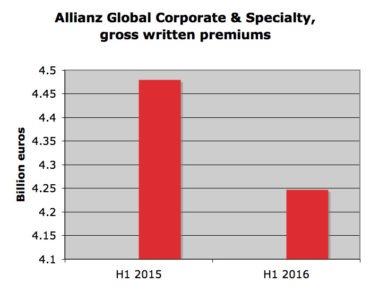 “Higher favorable runoff from prior years’ business was only partially offset by major Nat Cat losses in Q2 2016 caused by United States hailstorms, Canadian wildfires, floods in Germany and by other losses,” Allianz said Aug. 5.

In Canada, AGCS has offices in Toronto and Vancouver.

AGCS recently announced a new transactional liability unit in North America, which AGCS said will cover firms against “inaccuracies made about target companies or businesses in connection with mergers, acquisitions and divestitures.”

“This decline is driven by ongoing pressure on rates across various lines of business in a competitive market environment,” Allianz said, adding last year’s results reflect “top line results” before the sale of the personal lines of Fireman’s Fund to ACE Ltd. 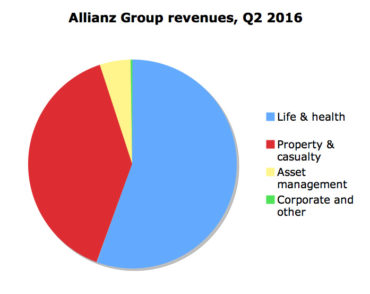 As of Jan. 1. 2015, AGCS integrated the commercial p&c businesses of both AGCS and Fireman’s Fund under the AGCS brand. In April of last year, ACE closed its purchase of the personal insurance business of Fireman’s Fund. ACE has been known as Chubb Ltd. since it ACE closed its US$13.9-billion acquisition earlier this year of The Chubb Corp.