Canada’s National Energy Board (NEB) has issued a 533-page report recommending the approval of the Trans Mountain Expansion Project (Project), subject to 157 conditions.

The recommendation from the NEB, an independent federal regulator of pipelines, energy development and trade, follows a public hearing process that included a thorough scientific and technical examination of all the evidence brought before the three-member NEB panel. The NEB also completed a comprehensive environmental assessment of the project. 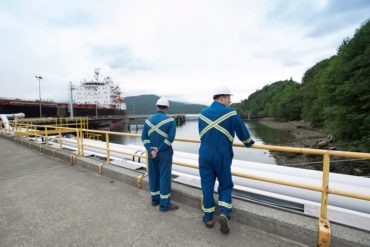 “Taking into account all the evidence, considering all relevant factors, and given that there are considerable benefits nationally, regionally and to some degree locally, the Board found that the benefits of the Project would outweigh the residual burdens,” the NEB said in a statement issued on Thursday.

The 157 conditions in the report include regulatory and/or overarching requirements, as well as requirements pertaining to project engineering and safety; emergency preparedness and response; environmental protection; people, communities and lands; economics and financial responsibility; and, project-related marine shipping.

Mary Polak, British Columbia’s Minister of Environment, said in a press release on Thursday that the government’s position has always been clear and consistent: that they would only support new heavy-oil pipelines in B.C. if five conditions can be met.

“These conditions include the successful completion of the environmental review process, ensuring world-leading marine and land-based spill response, prevention and recovery systems are in place, ensuring legal requirements regarding Aboriginal and treaty rights are addressed and First Nations are provided with the opportunities to participate in and benefit from a heavy-oil project, and, finally, that British Columbia receives a fair share of the fiscal and economic benefits from any proposed heavy-oil projects,” she said. “The NEB has recommended that the federal government approve the project, subject to required conditions. I am very pleased to see some of the NEB’s conditions reflect B.C.’s five conditions.”

Polak said that final approval from the federal government partially addresses the first conditions – successful completion of the environmental review process. The ministry’s Environmental Assessment Office will also be consulting with Aboriginal groups around their understanding of how the project may impact Aboriginal interests and whether any additional accommodation may be required, she added.

“Meeting all five conditions will be a challenge,” Polak conceded in the statement. “We set the bar high for a reason. We need to ensure B.C.’s concerns around the environment, First Nations’ participation and overall economic benefit are taken seriously. The responsibility for meeting the five conditions is complex and will take a great deal of effort from both industry and governments.”

The NEB’s recommendation report is one of the factors that Governor in Council will consider when making the final decision on whether or not the project should proceed.