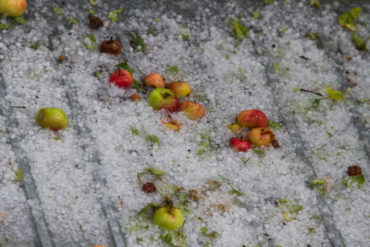 AFSC, the Crown corporation with a private sector board of directors that provides farmers, agribusiness and other small businesses loans, crop insurance and farm income disaster assistance, also noted in a statement that a total of 636 claims were completed for the week of Aug. 2 to 8. Eighty per cent of these claims were inspected within 31 days of reporting, AFSC said, but warned that future wait times may be different based on the number of outstanding claims.

To date, 3,213 “hail, pre-harvest and wildlife insurance claims” are currently waiting for an adjuster, while inspection has been completed for 3,591 claims. A total of 1,103 claims are in process with an adjuster and 377 are pending or deferred. 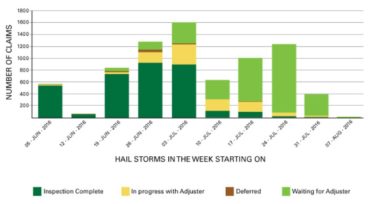 AFSC said in the statement that it prioritizes claims based on several factors, including inspection type, storm date, crop type and crop stage. “AFSC may delay an inspection until the extent of damage and recovery is evident,” the statement said, adding that longer wait times should be expected when claim numbers are high.

In late July, the Insurance Bureau of Canada reported that a severe storm that swept across the Prairies in June resulted in more than an estimated $50 million in insured damage, based on an estimate from Catastrophe Indices and Quantification Inc. The warm, humid air mass that crossed the region between June 28 and 30 resulted in multiple severe thunderstorms, heavy rainfall causing localized flooding, strong winds gusting over 100 kilometres per hour, intense lightning, significant hail in Okotoks and a small tornado near Ponoka, Alta.

PCS Canada reported that “a storm event with flooding, hail and wind from June 28 to June 30 in Alberta” cost an estimated $70.44 million in insured property damage. PCS Canada said that the majority of claims were the result of hail damage to vehicles, residences and commercial buildings.