Nearly 2 million homes in Florida, the Carolinas and Georgia at risk of storm surge damage from Hurricane Matthew: CoreLogic

Nearly two million homes in Florida, North and South Carolina and Georgia are risk of storm surge damage from Hurricane Matthew as it makes its way toward the United States’ Atlantic Coast, according to new data from CoreLogic, Inc. 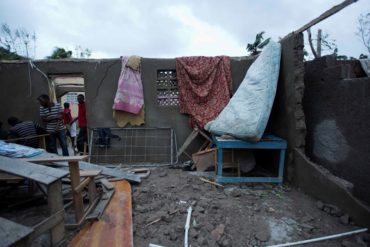 Residents walk into a destroyed home after it was damaged by Hurricane Matthew in Saint-Louis, Haiti, Wednesday, Oct. 5, 2016. Rescue workers in Haiti struggled to reach cutoff towns and learn the full extent of the death and destruction caused by Hurricane Matthew as the storm began battering the Bahamas on Wednesday and triggered large-scale evacuations along the U.S. East Coast. (AP Photo/Dieu Nalio Chery)

On Thursday, CoreLogic, a provider of global property information, analytics and data-enabled solutions, released data showing potential exposure to residential property damage from hurricane-driven storm surge flooding. In total, CoreLogic estimated that 303,501 homes were at risk in Florida from a Category 3 hurricane and 291,918 for a Category 4 hurricane; 81,039 for Cat 3 in South Carolina and 82,177 for Cat 4; 62,456 in North Carolina for Cat 3 and 46,086 for Cat 4; and 53,398 in Georgia for Cat 3 and 34,272 for Cat 4.

Category 3 hurricanes include sustained winds of 178-208 kilometres per hour, while Category 4 hurricanes involve sustained winds of 209-251 km/h, according to the National Hurricane Center (NHC). Cat 3 hurricanes will create “devastating” damage, in which well-built frame homes may incur major damage or removal of roof decking and gable ends, NHC said on its website. Many trees could be snapped or uprooted and electricity and water could be unavailable “for several days to weeks after the storm passes.” For Cat 4 hurricanes, well-built frame homes could sustain severe damage, with loss of most of the roof structure and/or some exterior walls. Most trees will be snapped or uprooted and power poles downed, with power outages lasting weeks to possibly months.

CoreLogic’s storm surge analysis encompasses single-family residential structures and also includes mobile homes, duplexes, manufactured homes and cabins, among other non-traditional home types, the company explained in a press release. RCV is based on a 100% or total destruction of the residential structure. Depending on the amount of surge water from a given storm, there may be less than 100% damage to the residence, the release added, which would result in a lower realized RCV. 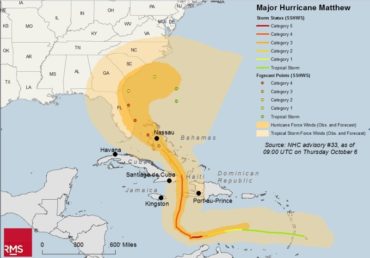 “Hurricane-driven storm surge flooding can cause significant property damage when high winds and low pressure cause water to amass inside the storm, releasing a powerful rush over land when the hurricane moves onshore,” CoreLogic explained in the release, adding that the analysis measures exposure to damage from storm surge and does not include potential damage from wind and rain associated with hurricanes.

“Today, there’s understandably a lot of focus on how Matthew’s going to affect the U.S.,” said Dr. Paul Wilson, an expert in hurricane and storm surge risk, in a statement from Risk Management Solutions, Inc. (RMS). “But it’s still having a major impact on the Bahamas.”

Two other hurricane risk specialists, Dr. Mark Powell and Dr. Mike Kozar, predicted that landfall is most likely to occur between West Palm Beach and St. Augustine early Friday morning. “Winds will likely approach and possibly exceed hurricane force across much of this stretch of coastline, with localized flooding from storm surge, and heavy rainfall,” RMS said in the statement. “The storm will gradually weaken as it remains very close to if not over land for much of Thursday night and Friday.”

Having impacted Haiti and Cuba, Hurricane Matthew is now progressing through the Bahamas, noted a media release on Thursday from catastrophe modelling firm AIR Worldwide. “Matthew is currently a Category 4 hurricane on the Saffir-Simpson Scale, and is expected to remain Category 4 as it nears the east coast of Florida,” AIR said in the release.

“Hurricane-force winds extend outward up to 60 miles from the storm’s centre and tropical storm-force winds extend up to 160 miles,” said Scott Stransky, assistant vice president and principal scientist at AIR Worldwide. “In addition to hurricane strength winds, the central and northwestern Bahamas are expected to experience eight to 12 inches of rain, with totals of up to 15 inches in isolated areas. Storm surge of 10 to 15 feet is anticipated, with battering waves exacerbating the potential for damage. Similar surge levels were experienced in parts of the Bahamas during Hurricane Joaquin last year, but the current surge will impact all of the island chain.”

Stransky emphasized that Matthew has now been a major (Category 3 or greater) hurricane for six days, “something no Atlantic cyclone has managed to achieve since 1963. Models now show Matthew ‘riding’ the coast of Florida as far as Georgia. Even if no actual landfall occurs, the storm will pass close enough to the coast to have similar impacts and it could be a very significant event.”

On Thursday, U.S. President Barack Obama declared a state of emergency in Florida and ordered federal aid to supplement state, tribal and local response efforts. The action authorizes the Federal Emergency Management Agency (FEMA) to coordinate all disaster relief efforts. Specifically, FEMA is authorized to identify, mobilize, and provide at its discretion, equipment and resources necessary to alleviate the impacts of the emergency. Emergency protective measures, limited to direct federal assistance, will be provided at 75% federal funding, according to a press release from the White House’s Office of the Press Secretary.

Millions of coastal residents are being urged to flee inland as #HurricaneMatthew nears Florida. https://t.co/Zvim1meOY9 pic.twitter.com/6hQyzBspRd

.@FLGovScott: "If you need to evacuate and you haven't, evacuate. This storm will kill you." #HurricaneMatthew #Outnumbered pic.twitter.com/blTUwODTKC