Nearly 6.9 million homes along the Atlantic and Gulf coasts in the United States are at potential risk of damage from hurricane storm surge inundation, according to CoreLogic’s 2017 Storm Surge Report. 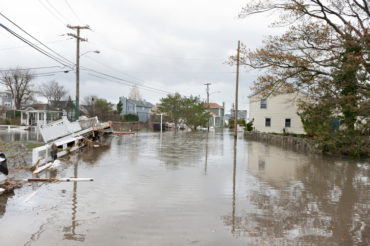 On Thursday, the global property information, analytics and data-enabled solutions provider released the report, saying that the total reconstruction cost value (RCV) of the homes is US$1.5 trillion. The RCV is the cost to completely rebuild a property in case of damage, including labour and materials by geographic location, assuming a worst-case scenario of 100% destruction, Irvine, Calif.-based CoreLogic explained in a press release.

“Despite the fact that this year’s hurricane season is predicted to have fewer storms than last year, it doesn’t mitigate the risk of storm surge damage,” said Dr. Tom Jeffery, senior hazard scientist at CoreLogic, in the release. “As we’ve seen with past storms, even one single hurricane at a lower-level category can cause significant damage if it makes landfall in a highly populated area.”

At the state level, the release said, Texas and Florida – which have the longest coastal areas – consistently have more homes at risk than other states. Again this year, as in previous years, Florida ranks first with just under 2.8 million at-risk homes across the five risk categories, and Texas ranks third with 536,000 at-risk homes. “Since the number of homes at risk strongly correlates with the accompanying RCV, these two states rank first and fifth, respectively, for having the largest RCV,” CoreLogic said in the release. 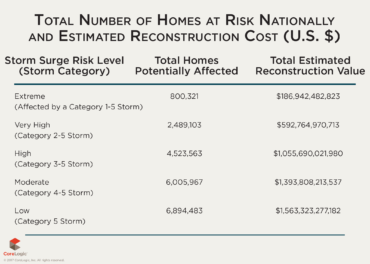 States with less coastal exposure but lower-lying elevations that extend farther inland, such as Louisiana (ranked second at 808,000 at-risk homes) and New Jersey (ranked fourth at almost 470,000 at-risk homes), tend to have more total homes at risk because of the potential for surge water to travel farther inland. Louisiana and New Jersey are also near the top of the list for RCV, with Louisiana totalling almost US$181 billion (ranked second) and New Jersey totaling US$140 billion (ranked fourth).

At the local level, 15 Core Based Statistical Areas (CBSAs) account for 67.3% of the 6.9 million total at-risk homes and 68.6% of the total $1.56 trillion RCV. “This disproportionate distribution of homes suggests that the location of hurricanes that make landfall is often a more important factor than the number of storms that may occur during the year,” CoreLogic suggested. In particular, the Miami CBSA, which includes Fort Lauderdale and West Palm Beach, has the most homes at risk totalling almost 785,000 with an RCV of US$143 billion. By comparison, the New York City CBSA has slightly fewer homes at risk at 723,000, but a significantly higher total RCV totaling US$264 billion due to the greater home values and high construction costs in this area.

More News
Related
More than 6.8 million U.S. homes with reconstruction value of US$1.5 trillion at risk from hurricane storm surge: CoreLogic
More than 200,000 homes in Texas at potential risk of storm surge damage from Hurricane Harvey: CoreLogic
Nearly 2 million homes in Florida, the Carolinas and Georgia at risk of storm surge damage from Hurricane Matthew: CoreLogic
Harvey creating life-threatening flooding in southeastern Texas, early damage estimate up to US$2 billion