Nearly 60,000 single-family homes in New Orleans to move out of special flood hazard areas by end of September: CoreLogic

Nearly 60,000 single-family homes in New Orleans with a reconstruction cost value (RCV) of more than US$12 billion will move out of Special Flood Hazard Areas (SFHAs), according to updated maps published by the Federal Emergency Management Agency (FEMA). 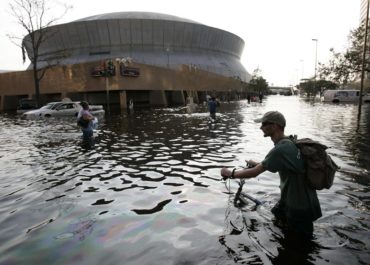 FILE – This Aug, 31, 2005 file photo shows a man pushing his bicycle through flood waters near the Superdome in New Orleans after Hurricane Katrina left much of the city under water. A new but controversial study asks if an end is coming to the busy Atlantic hurricane seasons of recent decades. The Atlantic looks like it is entering in to a new quieter cycle of storm activity, like in the 1970s and 1980s, two prominent hurricane researchers wrote Monday in the journal Nature Geoscience.(AP Photo/Eric Gay, File)

Officially in effect on Sept. 30, the new maps will reflect current flood risk as a result of improvements implemented since Hurricane Katrina floodwaters breached more than 50 levees eleven years ago on Monday, leaving most of the city under water, CoreLogic said in a data brief released on Tuesday. Hurricane Katrina caused an estimated US$41 billion in p&c insurance losses, the costliest and most destructive natural disaster in the United States.

The new report from CoreLogic, a global property information, analytics and data-enabled services provider, is titled Property Impact of New Orleans Flood Map Changes. It features interactive maps that compare the original flood maps to the new maps and also identifies the number and RCV of single-family homes that will move in and out of SFHAs.

According to the report, the current Flood Insurance Rate Maps (FIRMs) – which were issued in 1984 and will remain in effect until Sept. 30 of this year – show that approximately 85% of the Orleans parish (which encompasses the city) is in a SFHA. However, the revised FEMA FIRMs show that approximately 63% of New Orleans is in the SFHA.

The report also shows a close-up of the flood maps for the Fourth Ward of the city, which emphasizes the changes between the current and new FIRMs in one of the hard hits areas of New Orleans during Hurricane Katrina. “The new, more granular SFHA mapping, which takes into account the elevation above the Base Flood Elevation, shows that in some cases, only a part of a parcel may be included in a SFHA,” the report explained. “On some parcels… the structure is located outside of the SFHA, while other parts of the same parcel remain in the SFHA. Additionally, in some cases, the SFHA appears to follow roadways which are at a lower elevation than the surrounding parcels, providing a path of least resistance for flood waters to flow.”

For the properties which will move out of the special flood hazard areas on Sept. 30, flood insurance may no longer be required by lenders, the report said. “However, flood insurance is still recommended since the reclassification only indicates that the flood risk is reduced, not eliminated. In addition, a change from the SFHA classification means the cost of insurance should be significantly reduced.”

That data brief added that “properties outside of mapped high-risk flood areas generally account for more than 20% of all National Flood Insurance Program flood insurance claims and receive one-third of federal disaster assistance for flooding.”