Nearly seven in 10 Canadian drivers are adopting the use of winter tires, according to a new survey by Leger for the Tire and Rubber Association of Canada (TRAC). 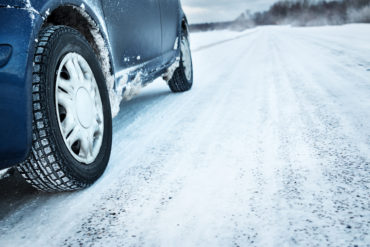 Outside of Quebec, where use of winter tires is the law, 68% of Canadian drivers now use winter tires, TRAC said in a press release on Wednesday. The results were from an online survey of 1518 Canadian motorists completed online between Oct. 17 and 20. A probability sample of the same size would yield a margin of error of ±2.5 percentage points, 19 times out of 20.

The survey’s findings, when compared to an identical study in 2014, show double-digit or near double-digit increases in all regions outside of Quebec. Winter tire use by region, excluding Quebec where it is considered 100%, includes the following:

Among the 32% of drivers still not using winter tires, the belief that all-season tires provide sufficient traction (48%) and cost (23%) are the most common barriers to adopting winter tires, according to the 2016 TRAC Winter Tire Report.

Rising usage rates for winter tires are the result of significant improvements in tire technology, particularly in tread design and rubber compounds, TRAC said in the release. These advances have improved traction performance across all tire categories, but especially for winter tires. The softer tread compounds in today’s winter tires retain their flexibility even in extreme cold. At temperatures at or below 7 degrees Celsius, winter tires provide significantly better traction than all other types. The result is significantly greater control on all cold-weather road surfaces and shorter stopping distances, TRAC reported. 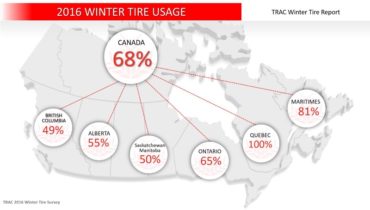 Tire and Rubber Association of Canada–Winter tire use survey

“Drivers adopting winter tires in record numbers is fabulous news because it means Canada’s roadways in winter are becoming significantly safer,” said Glenn Maidment, president of TRAC, in the release. “However, the fact that three-in-ten motorists still do not own winter tires poses a threat to all motorists. This is why outreach to educate drivers continues to be needed. Every motorist needs to know that today’s high-tech winter tires radically outperform all-seasons in all cold-weather driving conditions and offer potentially life-saving benefits.”

Since Quebec introduced mandatory use of winter tires in 2008, the provincial government has studied the impact on road safety and personal injury accidents, the release added. A study released in 2011 found that universal use of winter tires was responsible for a 5% decline in winter road accident injuries. This research concluded that 574 people were spared being involved in a personal injury accident because of universal winter tire use. The study also showed a 3% drop in deaths and serious road accident injuries.