The need for more collaboration between various municipalities and the consequences of poor land use policies were just two lessons learned from the Fort McMurray wildfire, a speaker said on Wednesday at the Canadian Insurance Financial Forum (CIFF). 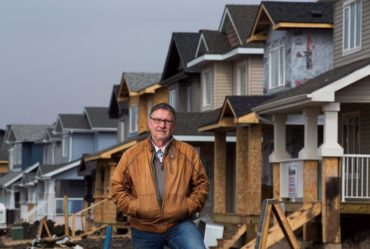 Gilles Huizinga president of the local Urban Development Institute and a homebuilder with Sedgewood Homes with newly built homes in the Timberlea area that was destroyed by wildfires last year in Fort McMurray, Alta. Thursday, April 20, 2017. THE CANADIAN PRESS/Todd Korol

Michael Brisebois, global head of reinsurance at TD Insurance, said that the Fort McMurray wildfire, which crossed multiple jurisdictions, showed the need for better collaboration between municipalities. “An example would be in the debris removal aspect of the recovery,” he said during a session titled Perspectives on the Canadian Reinsurance Scene after a Rough Year. “I think there was some confusion there initially and I think if that confusion could be avoided, that would get customers back on their feet quicker.”

Another lesson learned from the Fort McMurray wildfire was that “society as a whole is still living with the consequences of poor land use policies,” Brisebois said. “If you take the Waterways area, houses are actually being rebuilt on the Waterways area, even though it is a floodplain and there are no… robust flood mitigation plans that are in place,” Brisebois said. “I think the lesson that should have been learned out of this is we should really be focusing on the proactive prevention of these things.”

Another speaker on the panel, Jonathan Stephenson, executive vice president at Aon Benfield Canada, noted that for disasters like floods, there is still that “underlying issue, where houses are being built in uninsurable areas.”

Instead of focusing on mitigation once these events occur, Brisebois suggested, “many in the industry, not surprisingly, have said what we need to focus on is proactively preventing these types of disasters from happening.” For example, there could be the creation of a buffer zone between populated areas and the forest so that damage can be mitigated.

Community resiliency and its importance to the insurance industry is another consideration, said speaker Monica Ningen, managing director – chief property underwriter for the United States and Canada with Swiss Re. “What that takes is many different people working together – private, public, different government entities – and to the point of debris removal, even different parts of government working together and insurance and reinsurance companies,” she said.

For a positive example of collaboration, the industry needs to look no further than the efforts of the insurance and reinsurance sectors. “I think if you look back at the Fort McMurray event, the very significant and efficient collaboration between the insurance companies and the reinsurance industry is a very positive example of how we should be working together in these types of disasters,” Brisebois suggested.

Unlike the Alberta floods of 2013, wildfire “was very definitely covered under the insurance policy and insurance contracts,” Brisebois added. “The insurers that reacted the quickest faired the best from an insurer perspective and arguably from a financial perspective as well. What I mean is being on the ground first, but not only that, having the escalation protocols within their own organization that they can deal nimbly with any claims situations that arose… that would have led to a better customer experience, we certainly saw that but also, from a financial perspective, you could close claims more quickly,”

Social media also played a significant role in communication, with Brisebois suggesting it was “probably the primary tool used by people who were claiming as a means of communication. Traditional forms of media and other ways like email and that type of thing just weren’t quick enough to respond to the ever-changing information that was emerging.” Insurers that deployed a social media strategy were “well-off in terms of managing the event because they were able to quell false rumours and misinformation, tell their customers what they should be doing next and really help customers proactively manage through the event by providing that timely information,” Brisebois said.

Still, despite the enormity of the costliest disaster in Canadian history, Stephenson said that overall, “the industry is, I think, well-prepared to respond to loss, whether or not we can anticipate it.”