A client occupying a tall wood building could face higher insurance costs, a group of masonry producers claims, while one fire insurer confirms such a building deserves closer scrutiny from an underwriter.

Your insurance premiums would be higher as an owner of a tall wood building, warned Paul Hargest, president of the Canadian Concrete Masonry Producers Association, in an interview Friday. “A lot of fire departments across the country do not have the equipment to be able to fight a blaze of this magnitude and height, therefore potentially putting people at risk,” he said, referring to buildings taller than 10 storeys constructed from cross-laminated timber (CLT). By day, Hargest runs a concrete block maker in Cambridge, Ont.

Placing insurance for a tall wood building is “definitely something that deserves a second look” from an underwriter, Louis Gritzo, vice president and manager of research with Rhode Island-based insurer FM Global, told Canadian Underwriter earlier. But he added some CLT materials “perform very well” in fire resistance tests. 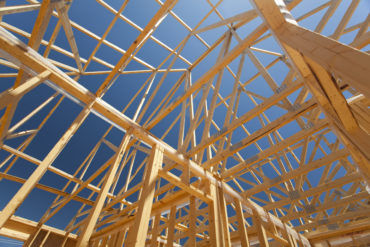 The past 10 years have seen major changes in building regulations allowing taller wood buildings in Canada. This in turned has spawned debate on how susceptible such buildings are to fire and water losses.

In 2009, British Columbia was the first province to change its building code to permit the construction of wood frame buildings taller than four storeys. Other jurisdictions, including Ontario, have followed suit.

Ontario also has a process allowing developers to build taller mass timber structures such as cross-laminated timber. CLT is made by stacking a layer of lumber or planks on top of and perpendicular to another layer. A piece of CLT is normally three to seven layers deep, the Canadian Wood Council notes. Individual wood panels can be up to three metres wide and up to 15 metres long.

In Ontario, in order to build a CLT building higher than seven storeys, a developer would need to convince municipal building code enforcers that the building is just as safe as concrete and steel structures built to code.

Lab tests indicate that CLT “can achieve significant fire resistance that is close to three hours in some cases,” the National Research Council announced earlier. In a paper published Aug. 23, Hargest notes that CLT panels normally “have a two-hour fire rating, meaning that it takes two hours before fire fully penetrates the inner layers and destroys its strength.”

But Hargest noted a fire set in a lab does not always mirror real life. Contents such as foam-filled couches, acrylic rugs and polyester curtains can add fuel to a fire.

“I understand what [wood producers] are trying to do – open up markets,” Hargest said. But “any wood structure, at least in the construction phase for sure, is a lot higher to insure than non combustible material.”

In 2017, Project Origine was complete in Quebec City. The building is a 13-storey structure that uses CLT as its primary building material.