The province of Alberta has announced that a new first responder radio system will launch on July 1. 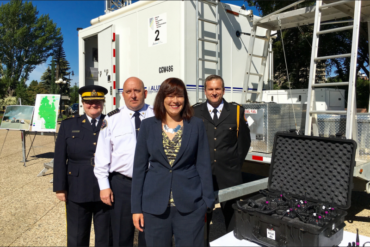 The Alberta First Responders Radio Communications System (AFRRCS) will let first responders communicate with each other more effectively, Alberta Justice and Solicitor General (AJSG) said in a statement on Thursday. The province-wide two-way radio communication system will provide coverage for first responders through a network system of hundreds of radio towers.

Currently, all police, emergency medical and fire services in Alberta use their own standalone radio systems that generally do not communicate with one another, the ministry explained. But with the AFRRCS, there will be an opportunity to: fully coordinate joint responses to emergency scenes; improve and integrate radio communication among first responders from different agencies; reduce the cost of radio system infrastructure; and use robust, resilient radio technology in day-to-day operations.

The system has been tested extensively and was used recently during the Fort McMurray wildfire crisis, AJSG reported, noting that AFRRCS radios were issued to emergency personnel from across the province and country, enabling firefighters to communicate with each other and the operations centre.

“The AFRRCS was absolutely crucial for us and all of our partners as we battled the Fort McMurray wildfire,” said Brad Grainger, deputy chief of the Fort McMurray Fire Department, in the statement. “The system allowed us to communicate efficiently with 32 different fire departments during the biggest crisis in our region’s history.”

Marty Scott, executive director of EMS provincial programs with Alberta Health Services, added that with all crews on one radio system, organizations can “better co-ordinate emergency response when Albertans call for help and can provide immediate support to our crews no matter where they are located across the province.”

In addition, AFRRCS will provide radio coverage in major urban centres and in remote locations where public and officer safety are “equally critical,” said Marianne Ryan, deputy commissioner of the Alberta RCMP. “While the new radio system is about providing first responders with a vital tool to do their important work, it also demonstrates what can be achieved by multiple partners coming together to work towards a common goal,” she said.

Construction on AFRRCS began in 2008 and will be completed this summer, with 328 of the 332 sites already completed. The total cost of the project was $438 million.