BRACEBRIDGE, Ont. – Ontario is launching a $1-million pilot project to help communities protect against effects of extreme weather after several in central and eastern parts of the province saw flooding this spring.

The government has already activated a disaster recovery assistance program for them, which helps cover emergency expenses and the costs to repair or replace essential property not covered by insurance after a natural disaster.

Municipal Affairs and Housing Minister Steve Clark announced Thursday that a new pilot project will give municipalities that qualify for that program up to 15 per cent above the estimated cost of rebuilding public infrastructure that’s been damaged. 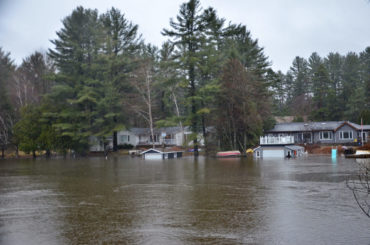 “We want to help municipalities build back better – to flood-damaged roads, bridges and other infrastructure – to a higher standard, so it can better withstand extreme weather and we know that some municipalities have limited financial resources to improve local infrastructure,” he said in a statement.

“By not having to rebuild the same washed-out road or bridge again and again, communities will save money over the long-term.”

The funds would allow municipalities to make their infrastructure more resilient to extreme weather, with measures such as raising roads, improving the footing of bridges or increasing the size of catch basins.

Ontario recently established a task force on improving the province’s resilience to flooding.

Earlier this year, the Progressive Conservative government cut conservation authorities’ funding for flood management in half.

Ontario had given $7.4 million to the conservation authorities for that work, but they say that has now been reduced by 50 per cent.

The government has said it is trying to eliminate the deficit – currently at $11.7 billion – and has asked conservation authorities to focus on their core mandate, which includes flood control.