New reinsurer view of Canada may be forming, likely to influence pricing

“It may have been somewhat considered in the past to be, perhaps, more of a diversifier, maybe a little less cat-exposed, other than out here on the West coast,” Cloutier, speaking during the Global Leaders’ Panel, said of Canada.

Citing the Fort McMurray wildfire – for which insured losses have been estimated at about $3.6 billion – he suggested a higher frequency of billion-dollar-plus events could make it tougher to think of Canada as a diversifier for reinsurers. 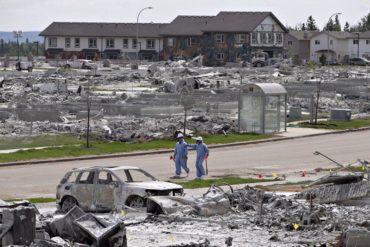 “If you think about that size of a loss in the context of the global US$30 billion of major loss total in the first half of the year,” Cloutier said, “to have that kind of a contribution come out of a market this size, I think, does cause some concerns.”

When pricing is considered on that basis, he noted. “I think it’s going to have to come back to more technical pricing and more exposure modelling.”

Mike Sapnar, president and CEO of Transatlantic Re, agreed it is necessary “to get down to some technical pricing, but there will be value for diversification. There will be some discounting for that.”

Although rate increases should be expected, “it depends on information, loss history and underwriting ability,” Sapnar explained.

“The pricing of those natural perils will naturally change, but it will be done in a way that is based on much better information and a much better understanding of the risk that is now being considered,” suggested John Charman, chairman and CEO of Endurance Specialty Holdings Ltd.

Beyond the estimated losses from Fort McMurray, moderator Peter Hearn, president and CEO of Guy Carpenter & Company, LLC, told attendees that “no one really appreciated or considered the massive concentration of values in such a remote location exposed to the peril of wildfire.”

Charman agreed. “The unmodelled and unexpected nearly $4 billion wildfire loss really surprised a great many of us,” he reported. “And this is before we actually get into the U.S. wind season, where our greatest natural peril exposures tend to come from,” he added.

Sapnar said he is not sure why the Fort Mac loss has come as such a surprise. “There is precedent on both modelled and unmodelled losses in non-correlating or cold spots or diversifying areas,” he pointed out.

“Of course, there’s going to be rate increases at renewal. I think it’s really not so much the issue of there was a loss, but more an issue of what is your view of risk,” he said.

Laura Taylor, managing partner and chief financial officer of Nephila Capital, pointed out, however, “the Canadian marketplace is already crowded.”

Noting that it “really comes down to supply and demand,” Taylor suggested “the view of risk is definitely important, and that could influence pricing, but capacity is a real factor.”

Although Charman’s advice was not to “look at Canada in isolation,” he did note “the industry really needs to step back, really look at the way it deals with natural perils in Canada.”

Cloutier noted “if you think about it in the traditional sense, Canada is sort of an imbalanced book. That challenge, I think, the industry in Canada needs to face that challenge. It needs to I think take a closer at risk, at values and then the primary side,” he emphasized.

The industry needs “to work with our customers and our distribution partners to really begin to understand and build, if you will, some more balance into the book by probably having a more honest view of the real risks and the real exposures here,” Cloutier said.

Citing the quake exposure in Vancouver, “if we think Fort McMurray is an interesting loss to us, and a bit of a surprising loss, I shudder to think what liquefaction is going to do to Richmond and Delta and the Fraser River system,” Cloutier added.

Despite the challenges, Sapnar emphasized “we’re committed to the Canadian market. I think really all the global reinsurer community is.”