ST. JOHN’S, N.L. – Linda Bishop says there’s a reason why every one of her group’s moose alerts that lands periodically in a handful of inboxes belonging to Newfoundland and Labrador journalists ends ominously with, “Urgent: Yes.”

“It’s urgent because it could cause an accident,” she said in a recent interview.

Bishop is the chair of Save Our People Action Committee, an organization behind a moose hotline created to give local media – mostly radio – a way to alert drivers about moose on the road. It’s one of a patchwork of efforts launched by SOPAC and the provincial government to curb moose-vehicle crashes, and data shows those efforts may be working.

Perhaps unsurprisingly, Newfoundland logged an average of 539 moose-vehicle collisions a year between 2012 to 2020, government data shows.In New Brunswick, the annual average is about 400.

But Newfoundland numbers are dropping steadily year over year, from 609 collisions in 2012 to 435 in 2019 – a difference of about 28 per cent. Overall motor vehicle accidents dropped by 20 per cent during the same period. Moose-vehicle crashes have accounted for roughly six per cent of all vehicle collisions during that time.

In 2020, with a pandemic-related stay-at-home order in place, there were few cars on the road and overall road accidents dropped significantly. Fatalities, however, spiked to record levels that year because drivers were emboldened by the empty roads, RCMP Cpl. Matt Christie said in a recent interview. 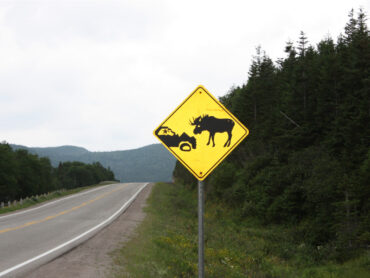 Bishop hit a moose on Oct. 25, 2004. She was driving to work on a remote, two-lane highway near St. John’s when a moose jumped out of the woods and onto the road, its eyes flashing white in her headlights before the inevitable slam. The crash broke her back and ended her nursing career, she said.

When she heard about SOPAC and its efforts to increase awareness about moose collisions, she knew she needed to be a part of it. “I don’t need anybody else to suffer like I did – and do,” she said.

Since 2015, her group has received an annual grant from the government to pay for the hotline, which costs about $2,500 a year and began a decade ago. The grant also pays for radio ads about moose awareness and for a series of signs alongside provincial highways advertising the moose hotline. The signs also remind drivers to be on alert for the massive animals.

Anyone who phones the line speaks with a person at the Telelink call centre in St. John’s, she said. The operator types the moose location in an email to a list of journalists in hopes they’ll broadcast an alert.

“We get calls from all over the province into our Telelink line,” she said. “So it is working.”

So far in 2021, The Canadian Press has received six SOPAC moose alerts from January to May – and 11 in July alone. August has been slow, with just four alerts.

“4 and half klicks by White Bay Convenience,” said one email about a moose sighting. “Urgent: Yes.”

The provincial government has launched a few of its own initiatives to reduce moose-vehicle collisions, sometimes at SOPAC’s urging.

About a decade ago, officials spent $2 million on a 17-kilometre stretch of fencing along a particularly troublesome section of highway, and they spent another $1.5 million on a roadside “moose detection system” involving flashing lights that were made to be triggered by the presence of an animal. A 2014 government report said the detection system was a failure, noting that it malfunctioned almost as often as it worked.

The fencing could work, the report said, but more data was needed.

“We place hunters from the fall hunt into a zone that’s three kilometres on each side of the highway and target moose that are in proximity to the highway as a means to curb moose-vehicle collisions,” he said.

Barney hit a moose about a decade ago, he said, but he wasn’t hurt.