Niagara top doctor says reopening border with U.S. this summer is too risky

The top public health official in Ontario’s Niagara Region says he wants the U.S.-Canada border to stay closed until the fall even as local business leaders and politicians call for the opposite to support the area’s tourism-reliant economy.

Dr. Mustafa Hirji said the risk of reopening the border this summer is too great, especially with the more transmissible Delta variant spreading in parts of the midwestern U.S.

“I think opening the border would put us at particular risk,” Hirji said in a recent interview.

Hirji noted that Canada has been fairly successful at controlling the spread of the variant compared to other jurisdictions, and lifting border measures too early could reverse that progress. The variant has caused reopening setbacks and infection surges even in highly vaccinated countries like the U.K. and Israel.

Mutual travel restrictions between Canada and the U.S. are currently due to expire July 21. The rules, that make exceptions for trade, essential workers and international students, have been extended several times during the pandemic.

Hirji said he would recommend extending the border closure this month and reassessing the situation in the fall so both countries have extra time to vaccinate more people.

“I expect, probably, we need another two or three months before we’re at the stage where we’ve maxed out our vaccinations, and we would be at a stage where we could reopen and not have to worry about the Delta variant overwhelming us,” he said. 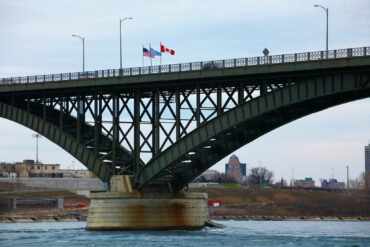 Hirji’s comments contrast starkly with those made by businesses and political leaders in the city of Niagara Falls who want Ottawa to reopen the border immediately now that COVID-19 trends are improving.

A joint statement issued by them this week argued many businesses in the city that shares a border with New York state earn much of their revenue in the summer months. They said their income stream is in jeopardy for the second consecutive summer.

The group also pointed out that American businesses just across the border are subject to less restrictive public health rules.

“Now is the time for immediate action, as many beloved Niagara Falls attractions are in danger of permanent closure,” the group said.

Border measures began easing slightly this week, with fully vaccinated Canadian citizens and permanent residents allowed to enter the country without quarantining, provided they have gone 14 days since their full course of a Canada-approved vaccine and completed a COVID-19 test before arriving.

The group of Niagara Falls politicians and businesses asked Ottawa to lay out its full plans for resuming international and domestic travel, with details for when fully vaccinated foreigners can enter the country.

Niagara Falls Mayor Jim Diodati was among the voices calling for a swift reopening.

“It is not just a priority for our sector, but a dire situation for Canadian border cities that a plan be put in place, that relies on science, to open the border, safely, now,” Diodati said in a statement.

Top executives with Niagara Falls Tourism, the Canadian Gaming Association and Niagara City Cruises also put their names behind the push for a firmer, and faster, border reopening plan.

New daily infections and hospitalizations have dropped in Ontario as the province vaccinates more people against the virus and slowly rolls back public health restrictions for businesses and gatherings.

The seven-day average for new infections sat at 216 as of Wednesday. Figures from a group of experts advising the government on the pandemic estimated the Delta variant made up nearly 82 per cent of cases.