The U.S. National Highway Traffic Safety Administration began the probe in June of last year after getting complaints that the system braked for no reason, increasing the risk of rear-end crashes.

But investigators, in documents posted Friday, found in testing that there was no single cause for unintended braking, and that the brakes came on only for short periods and didn’t cause any crashes. The agency says the Jeep system performs as well or better than similar systems from other automakers. Its tests found that the braking at the root of the complaints reduced the SUV speeds by less than 3 mph. 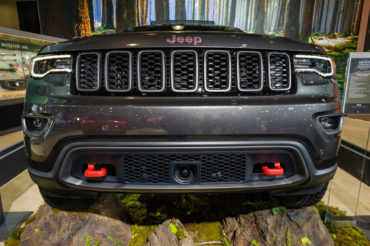 Forward collision alert and automatic emergency braking are available on many high-end luxury vehicles and are moving rapidly into more mainstream cars. The systems are an important step in the march toward self-driving vehicles, and are being championed by safety advocates and NHTSA as a breakthrough in reducing crashes and highway deaths.

Earlier this year, 20 auto manufacturers reached agreement with NHTSA to make the braking feature standard on most cars and light trucks by 2022, and on heavier SUVs and pickup trucks within eight years. If the Jeep investigation had found fault with the new technology, it could have slowed the spread of the systems. NHTSA, however, is still investigating Tesla Motors Inc.’s Autopilot system, which failed to spot and brake for a crossing tractor-trailer in a May crash that killed a man in Florida. Tesla has since made changes to improve the system.

The systems use cameras and radar to spot cars and other objects and a computer to automatically brake to avoid a collision. Some systems will fully stop vehicles, while others, like the Jeep’s, will only slow vehicles to reduce damage in a crash.

The Jeep investigation covered just over 95,000 SUVs from the 2014 and 2015 model years. It began after the agency received nine complaints that the Grand Cherokees braked on their own without reason “with no pending threats in the line of travel.” Investigators eventually found 176 complaints to the agency and to Fiat Chrysler, which makes Jeeps.

Several of those who complained to NHTSA said the brakes came on and nearly caused other cars to hit them from behind. Many reported that the malfunction happened multiple times.

But NHTSA said in documents that any unintended braking was short and didn’t reduce the speed of the vehicles by very much. The short braking in the Jeep system is meant as a warning to drivers if they don’t take action after getting audible and visual alerts of a possible crash.

“Analysis of field data found that unintended braking events occur randomly for a variety of causes and are not driven by any single environmental factor, traffic condition or vehicle fault,” NHTSA said in the documents.