No smoke alarm in home where blaze killed four

There were no working smoke alarms in a southern Ontario home where four people were killed in a fire this week, an investigator said Wednesday, calling the deaths a “preventable tragedy.” 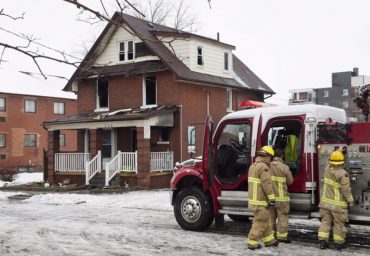 Firefighters pack up after responding to a house fire in Oshawa, Ont. on Monday, January 8, 2018. Two adults and two children have been killed in a house fire east of Toronto that also sent three other people to hospital, fire officials said Monday.THE CANADIAN PRESS/Frank Gunn

A mother and her two young children, and an unrelated man who ran into the burning home to help those inside, were killed in the blaze in Oshawa, Ont., on Monday.

“This is a preventable tragedy and it shouldn’t happen – not in today’s day and age with the technology we have, with the safety systems we have in place and the fire services that we have,” Rick Derstroff, an investigator with Ontario’s Office of the Fire Marshal, told reporters outside the home on Wednesday.

Smoke alarms would have given the home’s occupants early warning of the fire and a chance to escape, Derstroff said.

The Toronto Professional Fire Fighters’ Association identified three of the fire victims as Lindsey Bonchek and her two children, Madeline and Jackson. It described the trio as relatives of an association member.

The fourth person killed in the blaze was identified by his daughter and niece in emotional online tributes as Steven MacDonald.

The fire was reported a little after 8 a.m. Monday in the midst of a heavy snowfall. Firefighters arrived to find heavy smoke and flames that had to be fought from the outside before crews could attempt to rescue those trapped inside.

“The firefighters made several heroic attempts to get in and get to the upper levels and they were pushed back,” Oshawa Fire Chief Derrick Clark said Monday at the scene. “They fought their way up through intense heat and smoke conditions … and after retreating, they forced their way back in again.”

Neighbours reported hearing a bang and frantic cries for help as flames tore through the home.

Clark said Wednesday that he did not know if the building had gone through a fire inspection.

“That’s some of the data we’re currently looking into,” he said.

The brown brick house, officially classified as having two storeys plus a loft, was divided into two units, Derstroff said.

Natural gas has been ruled out as a fuel source for the fire and investigators are looking into other possible causes and ignition sources in the kitchen, he said.

“When that 911 call comes in something has already happened so (fire crews) are already behind, so the smoke alarm is what’s going to save you,” he said, adding the fire service “may get lucky sometimes but it’s already gone too far.”

“It makes it even worse when you have young children involved … there’s going to be an empty desk at school,” an emotional Derstroff said, issuing a challenge to teachers to get students to check on their home smoke alarms as a homework assignment.

“Maybe that’ll save a child’s life.”