Non-life premiums down 4% at PartnerRe

PartnerRe Ltd., which writes commercial insurance and reinsurance worldwide, reported this week a 4% drop in Q3 non-life premiums while the combined ratio was essentially unchanged at 82.7% 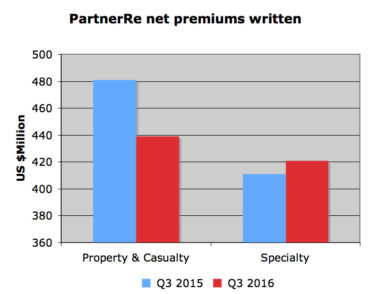 PartnerRe breaks down its non-life by specialty and property & casualty.

PartnerRe is owned by Turin, Italy-based EXOR S.p.A., which completed the acquisition in March, 2016. Before, it was publicly traded. Shareholders approved the $6.9-billion deal in November, 2015.

Originally, PartnerRe was going to merge with Axis Capital Holdings Ltd., which is also based in Pembroke, Bermuda. Both firms announced Jan. 25, 2015 that their boards were recommending a merger. Had it been completed, a combined firm would have formed a global top 5 reinsurer, Axis said at the time. However, EXOR announced in April, 2015 its offer to acquired PartnerRe.

“Although the Axis Capital deal originally was accepted by PartnerRe management, Exor SpA made several increasingly lucrative hostile offers eclipsing the monetary value of the Axis Capital offer,” wrote A.M. Best Company Inc. in a report – titled Return of the Mega Deal During First Half of 2015 – released in September, 2015. “The final offer from Exor was ultimately accepted after a proxy advisory company recommended shareholders vote in favor of the Exor offer.”