North America is the world’s most advanced smart home market, with an installed base of 21.8 million smart homes at the end of 2016 – a 47% year-on-year growth, according to machine-to-machine (M2M) and Internet of Things (IoT) analyst firm Berg Insight. 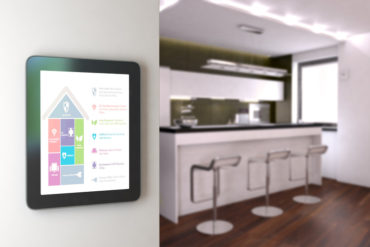 “The strong market growth is expected to last for years to come, driving the number of smart homes in North America to 73.0 million by 2021, which corresponds to 55 per cent of all households,” Gothenburg, Sweden-based Berg Insight said in a press release on Thursday.

Unlike other areas of development, the European market is still a few years behind North America in terms of penetration and market maturity. At the end of the year, there were 8.5 million smart homes in Europe and the market is forecasted to grow at a compound annual growth rate of 57% in the next five years to reach 80.6 million smart homes by 2021, which corresponds to 36% of all European households, the firm reported.

“2017 is anticipated to be a good year for smart home technology as entry-level smart home systems have become affordable for the mass market, at the same time as the reliability and features have improved significantly,” Anders Frick, senior analyst at Berg Insight, said in the release. 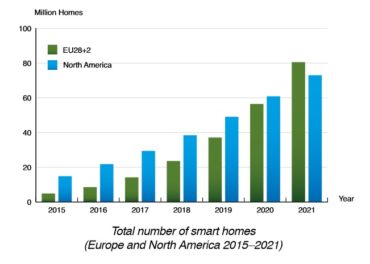 For example, the Alexa service from Amazon has quickly become very popular through its Echo products and Google is pushing its digital assistant through Google Home. “Furthermore, Apple with its HomeKit platform and the HomePod smart speaker, as well as Microsoft with its Cortana service and the Invoke speaker are ready to challenge Amazon and Google when the devices are being launched later in 2017,” Frick said.

Berg Insight anticipates that the popularity of voice enabled speakers will continue to increase and that smart speakers will be one of the most significant user interfaces in the home environment. “Amazon is still the leading player but Google’s and Apple’s ecosystems are stronger, at least outside North America,” Frick said.

More News
Related
Telematics subscribers using embedded systems to reach 170 million worldwide by 2021, from 26.5 million at the end of 2015: report
Autonomous cars will reach sales of 24 million units in 2030 from 0.2 million in 2020: research report
Global Internet of Things market expected to grow to US$561 billion by 2022: report
Shipments of “connected wearables” up 75.1 million devices to 96.5 million last year: Berg Insight