Northern Nevada braces for more flooding Thursday and beyond

RENO, Nev. – Northern Nevada officials still assessing millions of dollars in damage from the latest round of flooding braced Tuesday for another series of wet storms that could swamp parts of the state again into next week. 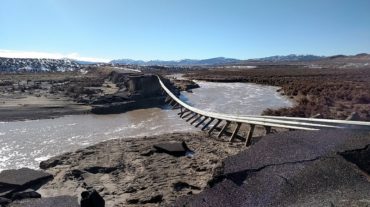 Officials in northern Nevada are still assessing millions of dollars in damage from the latest round of flooding in the state. Photo: @nevadadot.

Colder weather was providing some relief in northeast Nevada where as many as 100 homes and businesses evacuated over the weekend in and around Elko.

“It looks like things are calming down right now,” Elko County Sheriff James Pitts said in an interview. “We had some freezing weather overnight, which freezes the water, then it melts slower. That’s helping a lot.”

Gov. Brian Sandoval said multiple storms that hit the state in January caused $14.8 million damage and that the costs continue to rise.

Still dealing with flood-related issues in #Elko. Power to be restored after inspections to ensure safety. We're getting there. pic.twitter.com/D8xWgsnSzK

Douglas County in western Nevada estimates it suffered $1 million to $1.5 million in property damage from flooding last weekend on top of an estimated $3.3 million in damages from January.

The state approved an emergency contract Monday for $7 million to repair washed out roads to the Pyramid Lake Paiute reservation north of Reno, where overall damage exceeds $10 million.

In Elko, Pitts said at least one road had been reopened to two of the hardest hit housing subdivisions. Crews hoped to restore power and gas service to those areas by Wednesday ahead of the next round of storms, he said.

One Elko elementary school serving 650 students remained closed Tuesday. But county officials were able to reopen a single lane of a highway to the rural town of Montello where dozens of residents had been cut off in flooding after a dam burst nearly a week ago. State Route 233 remained closed from Montello to the Utah line.

“The railroad is chomping at the bit to get in to take a look at their tracks that are exposed there,” Pitts said. “But as far as citizens go – knock on wood – we haven’t had any injuries or deaths.”

Last Friday, Sandoval formally applied for federal disaster funds to help mitigate an estimated $14.8 million in damages from the January storms in Carson City, on three tribal reservations and in Washoe, Douglas, Lyon and Storey counties.

On Tuesday, he issued another state disaster declaration as a result of last week’s flooding in Carson City and Elko, Humboldt and Douglas counties. County officials were still assessing those damages for consideration of an additional request for disaster relief, said Caleb Cage, chief and homeland security adviser for Nevada’s Division of Emergency Management.

Evacuation is voluntary in elko southside. Official told me they haven't seen this area flood since the 1980's. @KUTV2News #nvflood17 pic.twitter.com/83lw07jjFZ

While the brunt of the January storms hit primarily along the Nevada-California line, last weekend’s impacts stretched all the way to Utah, Cage said Tuesday.

“The water levels didn’t reach the same level, but the breadth was much bigger,” he said, adding that “the ground was so saturated and the reservoirs and rivers were all so full that there was really nowhere for the water to go, so we were more prone to flooding with less water.”

That’s the same situation that could result with storms beginning late Wednesday and early Thursday in western Nevada, and Thursday into Friday in the northeast part of the state, the weather service said.

There is nothing that can be contained such as a wildfire, if it is not done appropriately and quickly.