While cleaning roof gutters is often touted as a flood risk mitigation measure, it can also address wildfire risk.

Commercial clients in areas at risk of wildfire need to remove all tree droppings from roofs – and that includes the gutters, said Scott Steinmetz, global head of risk control, MidCorp at Allianz Global Corporate & Specialty, in an interview.

“The gutters are really an important thing to understand,” said Steinmetz, who is based in California. “Those gutters are so close and integrated into the roof structure that when there is combustible material present and it gets ignited from wind driven embers, once the roof gets going, eventually the whole building will come down.” 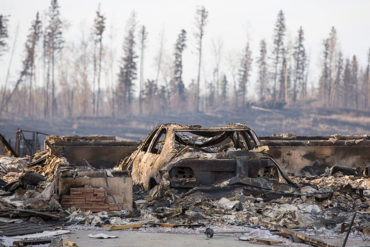 AGCS and Insurance Information Institute released Wednesday several pieces of advice on how to mitigate commercial wildfire risk. One risk mitigation measure is to establish and maintain a five-foot “no-burn zone” around your property.

“Nothing combustible should be present on the roof structure, in the gutter structure, or whatever rain water-shielding structure they have,” Steinmetz told Canadian Underwriter.

Make sure no foliage is near a window, he suggested. If a window blows open during a wildfire, embers and flame can enter the building through the opening.

“The reason buildings burn down completely is because wind-borne embers and/or any flame gains access to the inside of the structure and that happens a lot of times by heat transfer.”

Risk managers should make sure all plants, grass and weeds within 30 feet of the building are removed unless they are alive and watered well, said Steinmetz.

“2018 was a catastrophic year for wildfires and, as commercial development expands into forests and grasslands, the odds of wildfire-related property damage continue to escalate,” AGCS said Wednesday in a release.

The 2016 Alberta wildfire, which resulted in the evacuation of the entire city of Fort McMurray, was Canada’s most expensive catastrophe, with nearly $4 billion in industry-wide insured losses.

Climate change will increase frequency and severity of wildfire because of warmer temperatures and longer drought periods, Swiss Re reported earlier.

Earlier this week in British Columbia, a wildfire burned about four square kilometres of timber and bush in the southern Okanagan between Cawston and Osoyoos, The Canadian Press reported. That fire prompted an evacuation alert for 10 properties in the Cawston area.

Assigned to fight that fire were 100 firefighters, nine helicopters and an incident management team, CP reported.