Number of lightning-related homeowners insurance claims in the U.S. up in 2016, but average cost for insurers down: I.I.I.

The number of homeowners insurance claims from lightning strikes and electrical surges in the United States rose in 2016, compared with 2015, but the average cost that insurers paid on those claims fell, according to a new analysis by the Insurance Information Institute (I.I.I.). 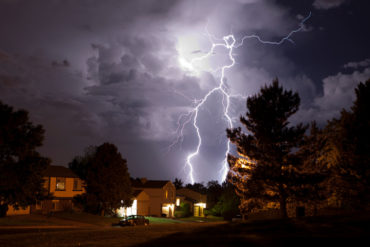 The New York City-based I.I.I., a non-profit, communications organization supported by the U.S. insurance industry, conducted a study in partnership with State Farm, I.I.I. said in a press release on Thursday.

The study found that:

“The average cost per claim dropped 4.7 per cent from 2015 to 2016,” noted James Lynch, chief actuary at the I.I.I, in the release. “However, the overall average cost per claim has risen 42.3 per cent since 2007.” By comparison, Lynch said, the Consumer Price Index, which the U.S. Bureau of Labor Statistics says “produces monthly data on changes in the prices paid by urban consumers for a representative basket of goods and services,” rose only 15.8% in the same period. 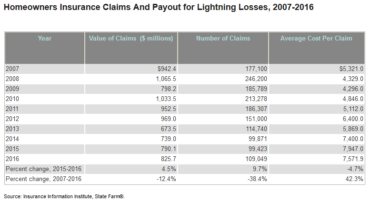 The I.I.I. explained in the release that damage caused by lightning, such as a fire, is covered by standard homeowners insurance policies. Some policies provide coverage for power surges that are the direct result of a lightning strike, which can cause severe damage to appliances, electronics, computers and equipment, phone systems, electrical fixtures and the electrical foundation of a home.

In recognition of Lightning Safety Awareness Week, which runs from June 18 to 24, the I.I.I. and the Lightning Protection Institute (LPI) encourage homeowners to install a lightning protection system in their homes.

“Lightning protection systems that follow the guidelines of [the National Fire Protection Association] are designed to protect your home by providing a specified path to harness and safely ground the supercharged current of the lightning bolt,” said Kim Loehr, communications director for LPI, a national organization that promotes lightning protection education, awareness and safety.

More News
Related
Number of lightning-related homeowners insurance claims in the U.S. down slightly in 2015, but severity up 7%
Recent earthquakes a reminder that events can happen anywhere: I.I.I.
Insured losses from Harvey’s wind, storm surge as much as US$2.3 billion: AIR Worldwide
Hurricane Matthew damage significant, but manageable, for U.S. insurers: A.M. Best

1 Comment » for Number of lightning-related homeowners insurance claims in the U.S. up in 2016, but average cost for insurers down: I.I.I.