OTTAWA – The gravel strewn across the bike path was the first sign of trouble.

Ottawa resident Steven Grant was out for a ride on Sept. 19 when he noticed an LRT train stopped in the middle of the tracks. Gravel from the bed under the rails had been scattered all over the nearby path.

“The second and third cars of that train set were clearly off the rails,” Grant said in an interview Thursday. “You could see the side panel, the kind of cowling over the wheels, is totally, totally damaged.”

Later investigations revealed the train was already in a state of derailment when it left the station with 12 people on board, and travelled that way across a rail bridge over a major six-lane roadway before hitting a signal mast and switch heater.

The driver hit the emergency brake and stopped just on the other side of the bridge.

In any other city, Grant said he would have been surprised to come across a sight like that, but this is Ottawa’s Confederation Line, and the derailment was the second one in as many months.

The $2-billion line, a major infrastructure project in Canada’s capital city that had been more than a decade in the making, opened just two years ago. It’s been plagued by calamities big and small.

A sinkhole swallowed a major downtown thoroughfare during construction. Door jams delayed the line for hours. Wheels developed flat spots. The stations smelled of raw sewage for some time. Salt spray from Ottawa’s roads gummed up the electrical works. Showers of sparks would occasionally cascade past the windows because the arm that connects the train to the power lines kept losing contact. These are just a few of the things. 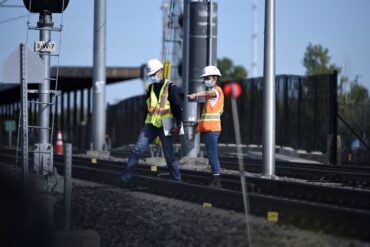 A growing chorus of transit riders, advocates and local politicians are demanding answers.

“My biggest fear is that there’s an accident where there is injury or loss of life. You cannot help but feel that today,” Ottawa Coun. Catherine McKenney said in an interview. “What else about this system do we not know that could render it unsafe?”

The federal Transportation Safety Board says Ottawa’s LRT system has derailed five times in the last two years. Three of those derailments happened off the main tracks, likely on their way to the maintenance yard.

McKenney has called for a judicial inquiry into how the city landed in this mess, and what else could be wrong with it.

“I believe that only if we’re seen to be serious about getting to the root cause of all of the issues on this system will we be able to, in good faith, go to the federal government and ask for more funding to continue to expand our lines,” McKenney said. “That’s what I hope that a judicial inquiry will help to do.”

Mayor Jim Watson opposes the idea of a judicial review, worrying it will slow progress on subsequent phases of the project.

It serves as the spine of Ottawa’s entire transit system, having replaced the rapid-transit routes in and out of the city’s core. Without it, the entire system stops until replacement buses can be marshalled to take passengers down busy streets not intended for heavy transit use.

Construction is already underway on Phase 2, which would extend the line to the east and west.

The federal Liberals’ re-election campaign promised to accelerate major public transit projects, and newly elected Ottawa Liberal MP Jenna Sudds, who had served as a city councillor since 2018, promised that the party would make extending the troubled Confederation Line even further into the suburbs a top priority.

Meanwhile, there hasn’t been a single train running for weeks, and there won’t be until repairs are made and the system is deemed safe. There’s no telling how long that will take.

“At this point, we don’t know,” Watson said Friday. “We’re not going to open it until it’s fully safe to our standards, and we have it signed off on by our independent safety monitor.”

Back in 2019, shortly after the line first opened, the doors of the trains would get stuck, jamming up the system for long periods of time. The crowds would build up to the point that hordes of commuters opted to make the 3.5-kilometre trek downtown on foot instead.

That’s when Matthew Roberts, a software developer who lives in Ottawa, created LRTdown.ca to track outages and delays. An automated Twitter account lets riders know how many days it’s been since the last delay. The single-page website says: “Is the LRT down? YES.”

“It seemed like there was constant problems happening, so I thought it would be funny,” Roberts said in an interview.

Little did he know the joke would still be relevant two years later. The website isn’t perfect, it simply scrapes OC Transpo’s service tweets, so it will occasionally miss an outage if the transit service fails to tweet it out.

The longest streak of actual service on record according to the program? Thirty-two days.

“That tells me there are problems,” Roberts said. “It’s just been one issue after the next, and honestly, I think it’s embarrassing.”

David Jeanes has been advocating for better rail options as a member of Transport Action Canada since 1976, and he said he’s never seen the kind of issues Ottawa is experiencing.

“Any of the problems that happened in Ottawa might happen occasionally somewhere else. But they don’t have a new problem every week,” he said.

One project isn’t enough to break Canada’s trust in light rail, Jeanes said, but other cities will be watching Ottawa’s situation carefully to see if they can avoid the same mishaps.

It’s too late to tear up the tracks, he said, so fixing it is now the only option.

“I still hope that Ottawa’s system will work out because we can’t do without it,” he said.

Though no one is quite sure what it will take to get the project back on the rails.

Feature image: A wheel of a segment of an OC Transpo O-Train is seen off the tracks Monday, Sept. 20, 2021 after it derailed west of Tremblay LRT Station on Sunday, in Ottawa. THE CANADIAN PRESS/Justin Tang