Officials warning B.C. flooding this year may be worse due to 2017 wildfires

The warning from the Cariboo Regional District comes as about 120 properties were ordered to evacuate Sunday in the Upper Nazko region about 100 kilometres west of Quesnel. 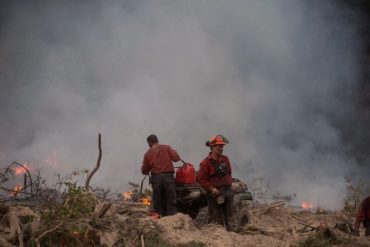 Flood warnings have been posted for the Nazko and West Road rivers in the region and Emily Epp, the regional district’s emergency operations centre spokeswoman, said surging water had already cut some roads and trapped residents on their land.

“The RCMP is helping them evacuate by helicopter and then we are transporting them by bus to emergency support services reception centre in Quesnel,” Epp said early Monday.

Flood watches were also posted by the River Forecast Centre for many other waterways around the Cache Creek, Merritt, Williams Lake and Quesnel areas, and Epp said the 2018 spring thaw was shaping up to be challenging.

“We are definitely seeing much more significant flooding than we usually do in our regional district and the experts at the River Forecast Centre and Ministry of Environment are advising us that a lot of this is due to the impact from the wildfires last year,” she said.

More than 12,000 square kilometres of timber and bush burned across B.C. between July and September 2017, with the largest wildfire ever recorded in the province, called the Plateau fire, destroying a massive area west of Quesnel and Williams Lake.

The Nazko watershed, where the current flooding is occurring, was significantly impacted by that blaze, Epp said.

“The experts are telling us that with the devastation to the landscape, the water and snowmelt is able to flow much more accessibly into the rivers and streams and so causes these high stream flow and potential flooding issues,” she said.

In southern B.C., evacuation orders were lifted early Tuesday and replaced with an evacuation alert for most properties in the Okanagan-Similkameen Regional District community of Tulameen. Residents on four streets closest to Otter Lake remained under an evacuation alert.

Evacuation orders had also been posted for the Sportsman Bowl area north of Oliver.

On Saturday, a mudslide forced the evacuation of 12 properties in the Killiney Beach area on the northwest side of Okanagan Lake.

The Central Okanagan Regional District said in a news release Monday that workers are trying to stabilize a road in the area and an assessment is underway to determine if a slope above the properties is stable.

“Only when conditions are safe, will the order will be rescinded and residents allowed to return,” the regional district said.

Rapidly rising river levels and the likelihood of flooding in low-lying areas for the southern Interior, Boundary, Kootenay and Peace regions prompted the River Forecast Centre to maintain high streamflow advisories there.

Recent rains, extremely heavy snowpacks and another round of temperatures in the mid to high 20s for many parts of southern B.C. are expected to add to flooding risks in the coming days.

The Provincial Emergency Co-ordination Centre advises people to stay away from eroded banks and keep children and pets away from stream banks, which could be unstable.

The centre also says to pay attention to changing conditions, especially in low-lying areas and it has listed steps to take in case flooding occurs, including creating a household emergency plan and moving valuables and equipment to higher ground.