PLAINFIELD, Ill. – The effort to clean up 40,000 gallons of crude oil continues south of Chicago where a freight train derailed last week. 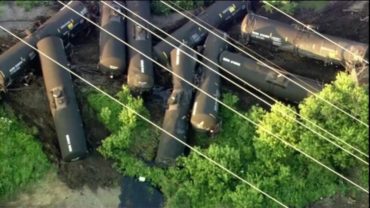 A Canadian National spokesperson said that the company is investigating the cause and circumstances of the derailment. Credit: @MotherEarthHH.

Canadian National Railway spokesman Patrick Waldron said Monday the company is investigating the cause and circumstances of the derailment in Plainfield, Illinois.

Federal Railroad Administration officials say the agency is also investigating Friday’s derailment of 20 tank cars of the 115-car train. Oil leaked from three of the cars, much of it flowing into trenches alongside the tracks.

Plainfield police Chief John Konopek says if a derailment had to happen it was fortunate it didn’t occur in a residential area.

Waldron says the environmental cleanup is proceeding well and will continue through the week. The cleanup will include the removal of contaminated soil.