“There is strong scientifically valid evidence of … seepage into near-field groundwater around tailings ponds,” says a report from the Commission on Environmental Co-operation, a body set up under the North American Free Trade Agreement.

“The findings in the report cannot be ignored,” he said. “I absolutely take these findings to heart.”

The commission also found that Alberta and Canada aren’t working together when it comes to keeping a handle on the industry, despite numerous agreements to do so. 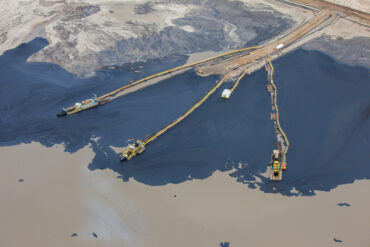 “The (commission) could not locate any information supporting any relationship between Alberta and Canada with respect to releases from tailings ponds,” says the report, released Thursday.

In 2017, the commission was asked by two environmental groups and a member of the K’ahsho Got’ine Dene First Nation in the Northwest Territories to look into whether Canada had done enough to investigate seepage from the ponds and if Fisheries Act water protections were being ignored.

The act forbids releasing any “deleterious” substance into water that may contain fish.

Bitumen residue has always been found in northern Alberta’s Athabasca River, its tributaries and area groundwater.

Both Environment Canada and industry have long contended it’s impossible to tell whether that residue is from industry or natural. Alberta’s acting Chief Scientist Garry Scrimgeour suggested that may still be the case.

“I’m not sure if we’re at a point where we’d be able to discriminate the two types of materials,” he said.

The commission, relying on years of peer-reviewed research as well as international experts, concluded that’s no longer true.

It says oilsands wastewater is seeping into both the groundwater under the tailings ponds as well as into two tributaries of the Athabasca River.

Although it says there’s inconclusive evidence of oilsands residue in the river itself, there are “indications” it has reached river sediments.

The report also draws on industry data which acknowledges seepage from the ponds.

Syncrude estimated that 785,000 cubic metres of tailings pond water – enough for 314 Olympic-size swimming pools – had seeped from one of its ponds in 2017.

The commission said it couldn’t find any evidence that the federal and provincial governments were working together to stop that.

“The (Commission) could not locate any information supporting any relationship between Alberta and Canada with respect to releases from tailings ponds,” it says.

Wilkinson said Alberta and Ottawa work well together on oilsands monitoring, but there’s room for improvement.

“The tailings ponds issue needs to be addressed and that will require more enhanced co-operation and an enhanced level of urgency on the part of both governments.”

Scrimgeour said the two levels of government are working well together, pointing out the oilsands monitoring program is co-chaired by the provincial and federal governments.

Daniel Smith, Environment Canada’s regional director for the area, said government scientists are now using technology that enables them to track oilsands contamination to its source and are analyzing samples taken in 2019.

“We realized we needed to improve the science,” he said. “If Environment Canada officers find violations (of the Fisheries Act), we will take enforcement action.”

Dale Marshall of Environmental Defence, one of the groups that brought the original complaint, said the report vindicated its concerns.

He said the lack of co-operation between Edmonton and Ottawa has meant enforcement has “fallen through the cracks.”

He wants to see action right away.

“I don’t know what else we need,” he said, pointing out the industry’s own data suggests the law is being broken.

“The federal government has all the evidence it needs,” he said. “Just do something about it.”

Feature image: An oil sands extraction facility is reflected in a tailings pond near the city of Fort McMurray, Alta., on June 1, 2014. An international environmental watchdog says there’s convincing evidence that oilsands tailings ponds are leaking. But after three years of investigation, a body set up under the North American free trade agreement can’t tell if the federal government is enforcing its own laws forbidding such releases. THE CANADIAN PRESS/Jason Franson