The governor of Oklahoma has declared a state of emergency for Pawnee County following a magnitude 5.6 earthquake that occurred early Saturday morning. 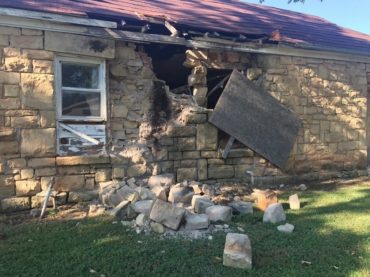 The earthquake was felt in multiple states and was the strongest the state has experienced since November 2011, when another magnitude 5.6 earthquake occurred in Lincoln County, Oklahoma Governor Mary Fallin said in a statement on Saturday.

“I’m glad to hear no one was seriously hurt in today’s earthquake and damage appears to be limited,” she said. “This emergency declaration will start the process to helping individuals, families and businesses impacted by the earthquakes and serves as a precursor to requesting any necessary assistance.”

While information on the earthquake is still being collected, officials are probing the possibility that oil and gas production in the area contributed to the event. The Oklahoma Corporation Commission – the state agency tasked with regulating the oil and gas industry – has ordered all Arbuckle disposal wells within a 725-square mile area of the earthquake to shut down and is working with the U.S. Environmental Protection Agency, which has sole jurisdiction over disposal wells in nearby Osage County.

The U.S. Geological Survey (USGS) said in a press release on Saturday that without studying the specifics of the wastewater injection and oil and gas production in this area, it could not currently conclude whether or not this particular earthquake was caused by industrial-related, human activities. “However, we do know that many earthquakes in Oklahoma have been triggered by wastewater fluid injection,” the release said.

Prior to the Sept. 3 earthquake, which occurred as the result of shallow strike-slip faulting about 15 kilometres northwest of the town of Pawnee, the surrounding area of Oklahoma and Kansas has hosted close to 80 other magnitude 4 or larger events over the preceding decade, USGS reported.

The USGS said in the release that locations across the central and eastern United States have been experiencing a rapid increase in the number of induced earthquakes over the past seven years. Since 2009 rates in some areas, such as Oklahoma, have increased by more than an order of magnitude. “Scientific studies have linked the majority of this increased activity to wastewater injection in deep disposal wells in several locations,” the release said. “However, other mechanisms such as fluid withdrawal, enhanced oil recovery, or hydraulic fracturing processes can also result in induced earthquakes.” 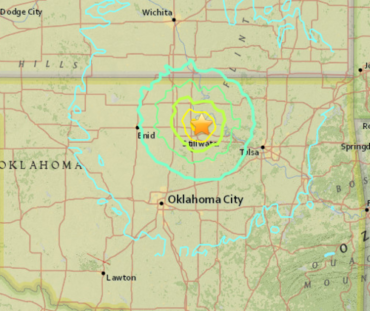 The earthquake occurred as the result of shallow strike-slip faulting about 15 kilometres northwest of the town of Pawnee. Credit: U.S. Geological Survey.

In addition, regions with frequent induced earthquakes may also be subject to damaging earthquakes that would have occurred independently of human activity, USGS said. “Making a strong scientific case for a causative link between a particular human activity and a particular sequence of earthquakes typically involves special studies devoted specifically to the question.”

The state of emergency declaration lasts for 30 days and additional counties may be added if needed, Fallin noted in the release. Her executive order allows state agencies to make emergency purchases related to disaster relief and preparedness and marks a first step toward seeking federal aid if necessary.

What a mess after the #earthquake in #Pawnee pic.twitter.com/sZC1QkdyIz